Last week, I attended WonderCon 2014 and wanted to share some (but not all) matters of interest related to Star Wars. First off, there were several clubs represented: 501st Legion, Mandalorian Mercs, R2 Builders, Rebel Legion, and The Twin Suns.  The one that attracted the most attention was R2 Builders with their array of R2 units (pictured to the left), which also got a fair amount of attention from children.  Also getting some attention was the display of Mandalorian Mercs, of which I had never previously heard, nor did I realize there was such a variety of Mandalorian costuming!

While there was a person representing The Twin Suns and one also for the Rebel Legion, the 501st Legion had, by far, the most extensive lay-out: with over a half-dozen costumed representatives, they also had a huge set-up where one could take pictures with them. I wonder how they were able to transport just the massive gray (Death Star-ish) panels for their backdrop. Additionally, they also had some costumed mannequins as well as other materials around – it was impressive!

Also, while there was a fair amount of Star Wars merchandise available for purchase, here are five pieces that I found of interest: 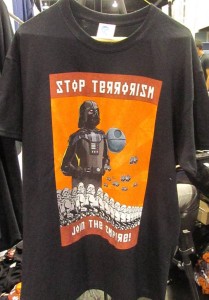 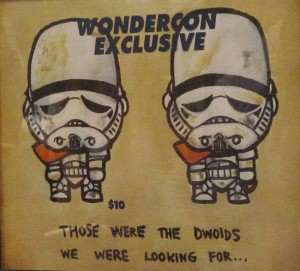 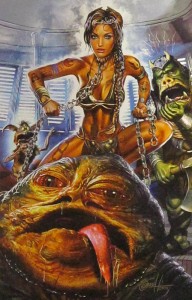