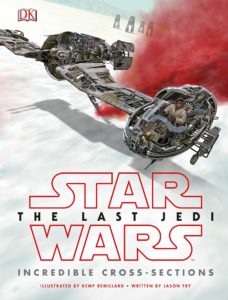 When I began reading such Star Wars cross-section books a couple years ago, including for The Force Awakens (which I discussed on Skywalking Through Neverland), it seemed like a genre that was too detailed. Who needed these details about these ships, especially those that point out various random details of the vessels? While I still am uninterested in most of the small details about these vehicles, such books are still of interest for three reasons: 1) even if I am uninterested in such details, there are some fans out there who are quite interested and, I would imagine, pleased that they are included, 2) some of the tiny details actually can be interesting, and 3) there is a lot of information that is quite fascinating in these books beyond the tiny details.

While I discuss the book in a more general fashion elsewhere, here are my top ten fascinating facts I discovered from this book:

2 – What does that mean for a ship to be that massive? A lot:

The Supremacy is the First Order’s most devastating war machine and de facto headquarters. But it is also one of the regime’s premier factories and research labs, with industrial capabilities that rival those of the most productive First Order worlds. Within the Supremacy’s armored decks are departments reserved for conceiving, researching, and approving new weapons and technology, well-stocked raw materials reserves, durasteel foundries, and state-of-the-art production lines, as well as training centers where young cadets are indoctrinated. The Supremacy can’t be cut off from supply lines because it carries them on board. (21)

3 – The massive walkers we see in the movie actually have a reason for looking the way they do. Since the “AT-M6 is fundamentally a platform for the MegaCaliber Six turbolaser cannon, which dominates the walker’s massive fuselage” (36), there arose a challenge of how to put such a huge cannon on a walker. The AT-M6 is the solution:

First Order researchers solved the challenge of how to incorporate the MegaCaliber Six cannon into a walker frame by redesigning the vehicle’s front legs. The legs were modified to bear increased weight and to provide the stability needed to brace the craft against the cannon’s massive recoil. The vehicle’s “knuckle-walking” Locomotion has another advantage: it gives the AT-M6 the aspect of a giant simeon predator, making an already intimidating weapon even more fearsome to enemy eyes. (37)

4 – I found the AT-HH to be really fascinating. It stands for All Terrain Heavy Hauler, and is the bulky tug walker, of which we see two pulling along the superlaser siege cannon on Crait. “The AT-HH borrows a strategy from the insect world: more legs means greater stability. The tug walker has three rows of legs; the front row holds 11 legs, while the rear two rows each have 10. The legs can rotate around their attachment points and be repositioned within the rows” (34).

5 – The naming of the remaining Resistance capital ship is named after Admiral Raddus from Rogue One:

The Raddus was named in honor of the Mon Calamari admiral who defied the nascent Rebellion’s political leaders and took a ragtag fleet to Scarif, sacrificing his star cruiser and his life to ensure the Alliance received the Death Star plans. The Mon Calamari species risked destruction at Imperial hands for their support of the Alliance, building the capital ships that formed the backbone of the fleet that triumphed at Endor. They remained loyal to the Resistance despite the disapproval of the New Republic, and when the Dawn of Tranquility found its way into Resistance hands, Admiral Ackbar petitioned to rename it in honor of a fellow Mon Calamari who had chosen to fight against seemingly insurmountable odds. (8)

6 – The Resistance fleet is actually not much at all:

The Resistance Fleet is barely worthy of the name: four capital ships, a handful of support craft, and a few squadrons of bombers and starfighters. But Leia Organa’s movement has always relied on assets not recorded in an order of battle – local allies, a capable spy network, and clandestine support from the New Republic allowed it to keep tabs on the First Order. (10)

8 – Why were the bombers at the beginning of The Last Jedi not in The Force Awakens? Apparently, it was due to another mission: “A mercy mission to Attera by D’qar’s Cobalt and Crimson squadrons left the bombers unavailable for the assault on Starkiller Base, but the squadrons’ survivors arrive in time to play a pivotal role in defending D’qar from the First Order’s assault” (12).

9 – The ship that DJ steals, the Libertine, is not only quite interesting, but the owner hadn’t been initially been planning on a getaway to Canto Bight:

The Libertine’s owner is Korfé Bennux-Ai, born into wealth on Celanon and a top-ranking manager for the Sienar-Jaemus corporation. Bennux-Ai has made a fortune selling starfighters that failed the First Order’s stringent quality checks to nervous star systems seeking to bolster their defenses. Frustrated by a failed deal with Zygerrian slavers, Bennux-Ai ordered his pilots to divert to Cantonica for a restorative night on the town. (32)

10 – There is a really amusing background description of the history of the ski speeders on Crait – according to this book, “the early Empire witnessed a fad for asteroid slalom” (42), and these ski speeders were initially created for these races. There are two paragraphs dedicated to this development, which is fairly amusing, since it really doesn’t affect the story of the movie. Nevertheless, it is a clearly creative background story(!). Also, for those wondering, “The ventral mono-ski stabilizes the speeder, ensuring its powerful engine supplies thrust and not lift” (43).

There are many more tidbits of fascinating and insightful information in Star Wars: The Last Jedi Cross-Sections – it’s worth checking out.

2 thoughts on “10 Highlights of Vehicles from Star Wars: The Last Jedi Cross-Sections”