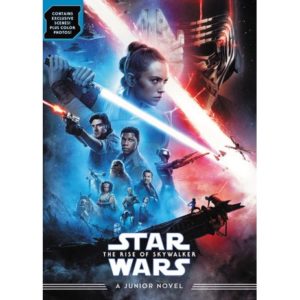 Yet, I was happily surprised by how much fuller the story was told than the movie was, yet still in an easy-to-read fashion. The author, Michael Kogge, did a splendid job taking the movie and making sense out of it.

What I greatly appreciated about this book was how much it brought in helpful information into the story. For instance, the opening sequence with Kylo Ren fighting people and then finding the wayfinder is much more interestingly told (pp. 14-19),** including this intriguing tidbit: “These Alazmec were pilgrims, having ventured to Mustafar to honor Darth Vader. Though the Dark Lord had perished a generation before, the fear he had inspired proved so deep-rooted that cults had sprung up worshiping him, just as they had for the Jedi and their twisted view of the Force” (p. 15).

Also in this early part of the book, Kylo Ren wasn’t keen on having Emperor Palpatine around if, indeed, his message signified that he was alive: “And if the Emperor was indeed alive, many in the First Order thought he should be the one in control, not Kylo Ren. Ren would not let that happen. He would root out this Emperor and kill him, just as he had killed his former master, Supreme Leader Snoke” (p. 17).

We also learn that Leia has significant Force powers and has been training Rey, something that was not clear in the theatrical version of The Rise of Skywalker:”She couldn’t ignore the woman who had done so much for her, spending her precious time teaching Rey what she knew of the Force and the Jedi. Many of Leia’s lessons came from her twin brother, Master Luke Skywalker himself, who had tutored his sister decades before. Though Leia’s life had diverged from becoming a Jedi, she had never closed herself off to the Force as her brother had. She allowed the Force to be a guiding hand in her decisions, she had told Rey, even though she seldom spoke to others about her gift” (25).

Another aspect about Leia and her Force abilities tturns out to be somewhat of a retcon for The Last Jedi: “when Leia had been floating among the debris in the cold of space, she’d realized that her duties were not done. So she sank into the Force to cocoon her body and sustain her life until she had drifted back into an undamaged section of the Raddus. Resistance medics did the rest, and she was able to recover in a matter of days” (p. 55).

I will share one further tidbit from this book, which is the relationship between Poe and Zorii: “He owed so much to Zorii. When he had left Yavin 4 after his mother’s death, Zorii had taken him under her wing and taught him all the tricks of the trade his parents hadn’t. Sure, they had broken a few laws together and run spice with some crooks, but she helped make him the man he was” (p. 104).

Much like a regular novel or junior novel, this book describes what is transpiring through the perspective of the various characters, which makes it an intimately more intriguing work.

If you are interested in a more compelling version of The Rise of Skywalker than the theatrical release, this junior novel is it.

* I found this review (minus the Poe-Finn shipping) to be roughly where I am with The Rise of Skywalker.
** All page references are to the paperback version.

The Mighty Chewbacca in the Forest of Fear is a Cute, Enjoyable Read
Tags: Books, junior novel, novelization, The Rise of Skywalker