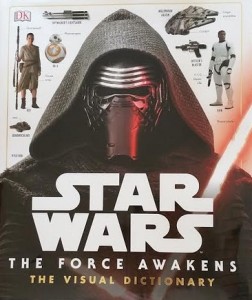 The same day that Star Wars The Force Awakens officially came out in theaters, a book came out that same day accompanying the movie to provide further insights into the characters, planets, gear, and more. Published by DK Publishing, Star Wars The Force Awakens: The Visual Dictionary hit bookshelves on 18 December 2015 (yes, the same day as “Before the Awakening”) and has a lot of insights into the movie.  Written by Pablo Hidalgo, there are a lot of fascinating elements behind the characters, situations, and weapons.  Here are my top ten favorite insights:

#10 Chewbacca is old, but has a lot of life left in him
Chewbacca sticks with Han Solo since he has a life debt towards Han Solo: “As a long-lived Wookiee, the decades that Chewie has spent at Solo’s side are scant payment of the life debt that Chewie feels he owes Solo” (48), yet, “At 234 years old, Chewbacca is still not yet approaching middle age for a Wookiee” (48). Also, we discover that, following “the Battle of Endor, Chewbacca helped lead the New Republic effort to liberate Kashyyyk from Imperial Rule” (48).

The galactic concordance prevented the First Order from accessing the scattered Academies that had filled out the ranks of the Imperial Navy. Instead, the surviving Imperials created new Academies far from the prying eyes of the New Republic, situating them aboard Star Destroyers built in hidden shipyards on the far side of the galaxy. The young fleet officers produced by these shipboard schools often spend their entire lives aboard Star Destroyers, and many think of these giant warships as their homes. (42)

#8 How Jakku became a place for scavenging

Since the war that littered Jakku’s landscape with debris, the planet has become a treasure trove for prospectors and scavengers of wildly varying means and fortunes. Niima Outpost, a crumbling settlement of rickety landing bays, dusty salvage yards, and the type of shady businesses that parasitically flourish around the desperate, is the closest thing Jakku has to a city. Interstellar travelers looking to find riches or lose pursuers keep a steady trickle of traffic coming to and from the outpost. (36)

After the Battle of Jakku, opportunists pounced to recover valuable metal, weapons, and scraps of technology from the scattered crash sites. The first enterprising scoundrel that sought to organize the collection efforts was Niima the Hutt. She was operating far from the borders of Hutt Space – a province of the galaxy embroiled in conflict as the Hutts tried to carve up the deceased crime lord Jabba’s territory. Though Niima was later killed by a bounty hunter, the outpost that she established still bears her name. (36)

#7 The New Republic wanted peace and did not worry about the First Order
We learn that “Lanever Villecham is in the second year of his first term of office as Chancellor of the New Republic Senate…. Villecham’s principal concerns in office include forging more agreeable trade relations with the neutral systems of the Trans-Hydian Borderlands. He is not worried about the First Order, as long as the former Imperials are contained within their border and are following the dictates of the Galactic Concordance” (66). Also,

Since the historic signing of the Galactic Concordance between the New Republic and the defeated Empire, the preservation of peace in the galaxy has been the dominant focus of the newly-restored Galactic Senate. Convincing a war-weary galaxy that this period of renewal would be different proved challenging, as similar promises had been made during the rise of the Empire. As a bold demonstration of the government’s dedication to break with historical precedent, the New Republic did not settle on Coruscant. Instead, its capital shifts across member worlds by a process of election. (66)

Jakku was once home to a secret Imperial research facility, and was the last rallying point of the Imperial fleet. Entering the atmosphere to tighten its cordon, the Empire fought determinedly to keep the New Republic from capturing the base. In its defense, doomed Imperial vessels used tractor beams to drag New Republic warships into the planet’s surface. The retreating Imperials destroyed the base before disappearing into the Unknown Regions. (35)

This, in turn, led to Jakku turning into the Empire’s final stand:

A generation ago, the last embers of the Galactic Civil War came crashing down onto the dunes of Jakku. The secluded planet, far on the fringes of the Western Reaches, became the final battleground of the Galactic Empire. An intense assault by New Republic warships led to the burning wrecks of vessels from both sides plummeting into Jakku’s atmosphere. The battle was ended by news of the peace treaty being signed on distant Coruscant, and the sudden departure of the surviving Imperial warships into the Unknown Regions. (34)

Hux was a child when the Empire surrendered to the New Republic with the signing of the Galactic Concordance. His father fled the Academy on Arkanis, and was one of the Imperials to make the exodus into the Unknown Regions, which the Empire had secretly been exploring. Hux grew up hearing legends of great Imperials, and how the Empire saved the galaxy from the violence of the Clone Wars. The young Hux firmly believed the galaxy needed to be saved from itself, as the New Republic was too weak to prevent the inevitable chaos. (40)

A young, ruthless officer in the First Order, General Hux has complete confidence in his troops, training methods, and weaponry. He has grown up celebrating his Imperial heritage – his father was a highly-placed official in the Imperial Academy of old – and Hux feels it is a matter of destiny that he be given a chance to sit on the throne that rules the galaxy. Hux’s experiences in warfare are entirely theoretical. Few would question the thoroughness or complexity of his simulations, but Kylo Ren, in particular, has little respect for Hux as a warrior. (40)

#4 Stormtrooper squads have specialists
One question that commonly occurred following people watching “The Force Awakens” was why is there a stormtrooper who just happened to be carrying a baton who fought Finn on Takodana? The answer is found in this book: “Standard ten-soldier stormtrooper squads contain a slot for a single weapons specialist. Depending on mission profiles, that specialist may be a megablaster heavy assault trooper, a riot control trooper, or a flametrooper” (19).

#3 Maz Kanata has a connection with the Force

Maz’s diminutive form seems at odds with her legendary exploits, though her larger-than-life personality bridges these extremes. Affable, eccentric, and wise, she has seen much in her centuries of life and can rapidly take stock of new acquaintances. In recent decades, Maz has kept secret one of her greatest strengths – an affinity for the Force. Though she has known Jedi…, she has never walked that path herself, instead relying on her strong connection to the Force to keep her out of danger. (72)

#2 Lor San Tekka has travelled a lot and knows Jedi secrets
The main old guy in the beginning of The Force Awakens, Lor San Tekka, has a lot of fascinating background, since he is a “seasoned traveler and explorer of the more remote fringes of the galaxy, Lor San Tekka has settled with a colony of villagers in the remote Kelvin Ravine on the frontier world of Jakku” (14). Since he is a “seasoned traveler”, what was he doing? “In his travels, Lor San Tekka uncovered much of the history of the Jedi knights that the Galactic Empire had tried so hard to erase. Others now seek him for his knowledge of Jedi secrets” (14). Furthermore,

Though San Tekka is not Force-sensitive, he has witnessed its power firsthand. During the dark times of Emperor Palpatine’s rule, San Tekka was a follower of the Church of the Force. This underground faith was made up of loosely affiliated worshippers of the Jedi ideals, who steadfastly believed that one day their light would return to the galaxy. (14)

#1 Kylo Ren’s lightsaber is an ancient design
The most fascinating aspect of the book to me was about Kylo Ren’s lightsaber, as it”evokes an ancient feel, its components are modern. Its crude appearance suggests construction by an inexperienced hand” and that it has a “stressed crystal” which “barely contains the power of the weapon, necesitating lateral plasma vents that become the crossguard quillons” (26). Furthermore,

Kylo Ren’s unusual lightsaber is an ancient design, dating back thousands of years to the Great Scourge of Malachor. The crossguard blades, or quillons, are tributaries of the primary central blade, all spawning from a cracked kyber crystal that is the cause of their ragged, unstable appearance. An array of focusing crystal activators split the plasma stream into perpendicular blade energy channels, creating the quillons. The emitter shrouds on the crossguard protect the bearer’s hand from the smaller blades. (27)

Okay, I have several more that I felt were worthy of honorable mentions, so here they are:

It’s certainly worth picking up and reading through!

10 Highlights of Vehicles from Star Wars: The Last Jedi Cross-Sections