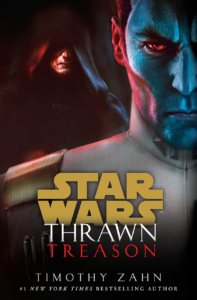 Having read Thrawn, reading Thrawn Alliances last year, and I just finished reading Thrawn Treason yesterday, and it is my favorite of the three of them.

While I enjoyed the first book immensely, especially as a good introduction to Thrawn, following his appearances in the third season of Star Wars Rebels, Thrawn Treason stands out as the best of the series. The second book, Thrawn Alliances was kind of neat to see Thrawn’s interactions with Darth Vader, and while it also included Clone Wars era interactions amongst Thrawn, Padmé, and Anakin Skywalker, it seemed strange to me that Padmé would be going off on this mission amidst the craziness of the Clone Wars. So that was a big problem for me in that book. Also, it seemed to have shoe-horn Batuu/Black Spire Outpost into the book, so I also wasn’t so interested in that part.

Thrawn Treason not only brings together aspects from the first two books, but does it well, in addition to providing nice little things throughout that really tie the Star Wars universe together nicely, which makes it a pleasure for any Star Wars fan.

A cool part of this is that it’s part of the larger politics between Tarkin and Krennic in the construction of the Death Star, which provides some great further context for both Rogue One and Catalyst: A Rogue One Novel.

However, what really takes Thrawn Treason to the next level is the clever thinking of Thrawn, which can seem, at times, as if we’re not getting a full picture of what’s going on, but some of it is to demonstrate to us readers that Thrawn is thinking about things that no one else is cognizant of.

In the end, however, there is a whole chain of events that Thrawn masterfully orchestrates owing to his incredible intellectual perception of the people involved, which is gripping reading and I absolutely could not put down this book towards the end.

This book runs right up to before Thrawn’s arrival on Lothal in the fourth season of Star Wars Rebels, which makes me want to re-watch it all over again with this fascinating context for Thrawn.