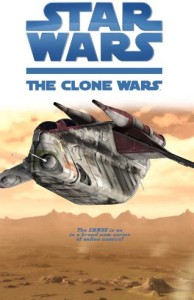 Having finished re-watching the first season of “Star Wars: The Clone Wars”, I also kept up by reading the accompanying webcomic, which I finished, as well. Of the five-and-a-half seasons of “Star Wars: The Clone Wars”, this was the only season to have an accompanying webcomic that provided a lead-in story to the episodes (although there was one episode that did not). One thing that stands out is the opportunity this webcomic furnishes: a further story, as Dave Filoni wrote, “These online webisodes fit in between the gaps in the television series and allowed the fans to immerse themselves in the Star Wars universe like never before.”

Having read all of them, I highly recommend their reading prior to watching any season one episode. Not that all 21 segments are good, but even the not-so-good segments provide a little something to the background of an episode (or the story, writ large). And there are certainly some really good ones amongst the bunch, about which I posted previously. While in some segments, there are less-interesting things happening, there is usually something redeeming. However, “Departure”, in which we see C-3PO and Jar Jar Binks having a ship taken from them on Coruscant by thieves, stands out in my mind as one that could have been done without – it really does not add anything and is annoying (yeah, it’s probably because of Jar Jar).

For the one episode that did not have a corresponding webcomic (“Mystery of a Thousand Moons”), I am surprised – while I understand that it proceeds as a direct continuation of the previous episode (“Blue Shadow Virus”), it would have been nice to have had the webcomic for this episode to be about Iego and, perhaps, specifically about Jaybo and his droids. Having that as an introduction would have been a good introduction to get a better sense about him.

Although there may have been more errors, I did notice a couple of continuity errors between the webcomic and the televised episodes:
– “Bait” – Anakin brings lightsaber on-board with him to fight the battle droids, which gets broken. In the episode (“Dooku Captured”), there is a comment about not having brought one on…
– “Switch” – Although we see how Anakin and Obi-Wan could be knocked out, not having drunk the ‘wrong’ drink, yet they make a comment in the episode (“The Gungan General”) about having drunk too much….

Overall, I highly recommend reading these webcomics prior to each of the episodes, as they help fill in some blanks of the episodes. Not only that, but they are pretty quick reads, which take very little time, as well as getting one’s mind going and getting one excited about the upcoming episode.