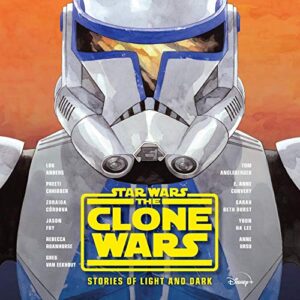 A new book featuring eleven short stories from Star Wars The Clone Wars hits bookstores tomorrow. Star Wars The Clone Wars: Stories of Light and Dark features ten stories based off of Star Wars The Clone Wars episodes from seasons 1, 3, 4, and 5, along with one completely new story that provides further information details about the Nightsisters. Edited by Jennifer Heddle, the stories in this book contain both insightful third-person storytelling, as well as some first-person perspectives from the characters in the episodes.

Overview
Based off of a few episodes from the first season, one from the third season, four from the fourth season, and two episodes from the fifth season, the short stories in this volume rehash what happens in these episodes. The first-person storytelling are quite neat, as they provide distinct viewpoints from particular characters, such as Cad Bane and Darth Maul, although there are some really solid third-person stories in here, as well. Some of the third-person storytelling is done with a particular character at the center of the story, along with access to their thoughts and opinions as to what’s occurring. While there is a good story centering on Padmé, the third-person story that quite impressed me was one concerning Asajj Ventress. While some of these stories don’t really add so much, some of these do provide some sense of interiority concerning specific characters, as well as a nice added dimensionality to the storytelling. These additional layers of storytelling provide further context for us fans of Star Wars The Clone Wars.

Listing of Stories
Here is a listing of the authors, stories, and episodes off of which they are based:

Original Story
The eleventh story in the volume, written by E. Anne Convery, is the most fascinating one, however. Told in third-person following the events that transpired in the third-season episode “Massacre”, a witch from Dathomir tells a young girl about certain happenings on Dathomir. This story is fascinating not only for its content, such as what we learn about the witches on Dathomir and the Nightsisters, but also the style of the story is filled with mystery and intrigue, providing an enjoyable read of a story. One cool thing included in the story is that we read that the Nightsisters on Dathomir are not the only witches clan on Dathomir, as there are others. Another is that we finally get a glimpse at what may be Asajj Ventress’ origin story(!), which is really cool!

Interesting Insights
Throughout the book, we read of interesting insights from the Star Wars universe. Here’s one concerning Yoda’s travels throughout the universe, that when he

visited a new world, Yoda would take a moment to open himself completely to the Force. He’d let his senses be flooded by the life energies around him. And everywhere he visited, he found beauty and wonder. Sometimes, he had to look for them – look hard, even – but they were always there, and, over the centuries, he had decided they must be products of life, two more expressions of the ever-changing Force. (p. 1)

Padmé knew all about masks. When you were queen, you must keep your face blank, as if you had never felt an emotion in your life. In the Senate, you wore a different kind of mask. If you were on the side of continual war, you could contort your face in all kinds of ways – sorrow, horror, outrage – and no one cared what was underneath the mask. If you were against the war, if you wee a partisan, if you were young, if you were everything Padmé was, you had to keep your face calm, reserved. You could show a bit of passion, but just a bit. Too much and you were too emotional. Too little and you were a protocol droid. (pp. 95-96)

And this excerpt about the Nightsisters’ burial pods is super-fascinating:

The Nightsisters of Dathomir had what might seem to some a curious custom for burying their dead. They believed that dead witches rejoined their ancestors on the spirit plane and that the living should do all in their power to help them along. That is why they bundled the bodies of their dead with great ceremony into bags of rancor hide – adorned with bones and shells and strung wiht herbs against the sell of decay – and hoisted them up high above the ground. (p. 352)

Reason for Book?
One thing that is unclear to me about this book is: why was it made? While I enjoyed the original story in this book, why was this book published with ten stories based off of previously aired episodes? To be honest, I liked the added dimensionality to the characters and in these stories, but I would have liked for there to have been some explanation in the introduction as to why this book was made in the first place. Why were they seeking now to deepen further stories told about episodes already published years ago? I’m not saying that there is no purpose to them, or whether they should ever have been published, I just would have appreciated some framing, some context as to why they’re being published, as well as to why the volume is coming out now. A simple paragraph in the introduction spelling out specifically why these stories are being told, why certain episodes, and why now would have been very helpful.

Conclusion
This book seems to target people who are already fan of Star Wars The Clone Wars and looking to deepen their understandings of the characters and stories of certain episodes. Told in easily digestible short stories for a younger reader audience, this book is easily accessible for reading. In addition to these ten stories, one original story appears at the end of the volume, providing intriguing information about the Nightsisters, witches on Dathomir, and Asajj Ventress’ origin story. This volume provides me hope that use fans of Star Wars The Clone Wars may possibly get some future written content around this excellent series. Published by Disney-Lucasfilm Press, Star Wars The Clone Wars: Stories of Light and Dark hits bookstores tomorrow, August 25th, 2020.

Disclosure
A review copy of the book was furnished to the author for review purposes.
(Visited 500 time, 500 visit today)

The Beginnings of the First Order as Remnants of the Galactic Empire, as Told in “Star Wars Aftermath: Empire’s End”
Tags: Book, Books, Disney-Lucasfilm Press, short stories, The Clone Wars