A new Star Wars book coming out later this month shares some dark and monstrous stories…in an amusing way. Written by George Mann, Star Wars Dark Legends provides seven short stories that curiously delight in their darkness. Published by Disney Lucasfilm Press, Star Wars Dark Legends provides a dark follow-up to last year’s Star Wars Myths & Fables, which featured similarly-styled stories, yet the ones in this book are all filled with something scary or morose.

“In truth, this book is brimming with secrets that should never be told,” we are told in the introduction (p. xii). “Herein, too, lies a despicable certainty: the galaxy is rife with terror. It crowds the shadows, lurks at the threshold, watches from behind every half-closed door. The dark side is ever present, waiting to tempt the unwary, to make monsters of the benign, to twist the bright spark of the imagination toward fear.” 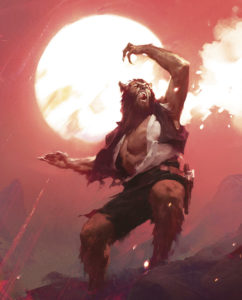 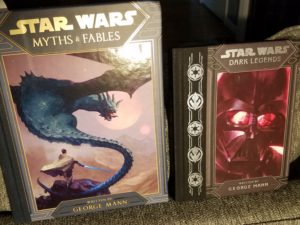 One of the neat facets of “The Gilded Cage” is that it returns characters from last summer’s Star Wars Myths & Fables, in bringing back not only Ry Nimbis (pp. 158-160), but also his teacher, Darth Caldoth, about whom they had been written in the story, “Gaze of Stone” in Star Wars Myths & Fables (pp. 97-116), which is nice to see that connection and further development of their stories and characters.