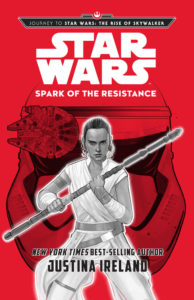 With The Rise of Skywalker coming out this week, fans interested in reading Star Wars books might delight in a recent book that came out this fall. Published by Disney/Lucasfilm Press, Spark of the Resistance is written by Justina Ireland and takes place between the events in The Last Jedi and The Rise of Skywalker. We don’t know a whole lot that transpires between these two movies, so this book stands out in that we get a sense of what’s going on with the Resistance during this time period. This book also includes illustrations by Phil Noto, who has also done illustrations for Cobalt Squadron and Moving Target, both of which are similarly-sized books and for a similar reading audience.

A Glimpse into the State of the Resistance

This book follows a particular adventure of Poe Dameron, Rey, Rose Tico, and BB-8 on the planet Minfar as they encounter both local creatures, as well as the First Order (Finn is off on a similar mission with Chewbacca during this time). Obviously, we know our protagonists survive because they have to make it to the movie that’s coming out this week. It’s a cute book and a pretty easy read, so teenagers can certainly read this book, as well as adults. We get to see a little about the state of the Resistance: “So far, thanks to a lot of work and a little luck, they had a small fleet of Mon Calamari and Corellian ships, and droids to help with operations. But there were not nearly enough Resistance fighters to take on any kind of significant First Order threat” (118-119).

We also get to see a little sneak peek into Rey’s Force abilities and sort of where they’re at which seemed to need a lot of development, as we see earlier on (13-14):

Since the Battle of Crait, Rey had struggled with trying to figure out what were her own thoughts and what was tied to the larger, more complex workings of that magnificent power that united all life in the galaxy. She didn’t understand the Force, if anyone truly did, but even more frustrating was not being able to use it to fix everything. It wasn’t like a blaster or staff, solid and steady in her hands. Instead, it was a bit like trying to grab a damp slugill, slippery and unpredictable. It made her doubt everything, including herself.

To some degree, it reminds me of Luke working on his telekinetic powers in Heir to the Jedi between A New Hope and Empire Strikes Back. Eventually, we read of her developing it (200-201):

All this time, she’d been trying to reach for the Force,  the spot inside of her that felt more connected to everything. Again and again it had been for naught, and she’d gotten more and more frustrated.

But this time she relaxed into the warm potential of the Force and she asked it to guide her, to make her steady, to lead her on a path that was successful. She wasn’t a Jedi and she was nothing like Luke Skywalker, but for a moment Rey sensed something – a spark of possibility, an inkling of potential – and she felt more centered and infinitely more capable.

The Force was all around, just as it always had been, but this time Rey could feel it.

One of the neat aspects of this book is these central characters to the sequel trilogy developing relationships with each other. For instance, Poe keeps trying to drive the Millenium Falcon: “He’d been trying to take the pilot seat since they’d set out, but the Millennium Falcon was hers for now, and she would fly it even if Poe was determined to try out the controls of the legendary ship” (7).

Also, we have never seen Rey and Rose interact on-screen, which yields the following acknowledgement (8):

Rey hadn’t known Rose very long. The first time Rey had seen Rose she’d been unconscious, knocked out during the fight on Crait. But since then Rey had worked with Rose quite a bit and Rey had found her to be a really nice person. Rey could tell that Rose cared about others deeply. She was always offering to share her meager rations or let someone take a nap on her cot. She was just a very considerate person.

Amusingly, Rose names all of the porgs on-board the Millenium Falcon (9).

The book largely follows our protagonists as they set out to Minfar, in response to a distress call put out by Jem Arafoot of the Zixon, who alerts them to the First Order trying to establish a base on the planet. The First Order forces are led by an officer, Commander Branwayne Spiftz, who is not the sharpest tool in the shed. His operation is being assisted by Professor Glenna Kip, who has some prior knowledge of the planet and creatures. One thing I will highlight here is a thought of Commander Spiftz, who doesn’t believe that the Force exists: “they sounded like farfetched fairy tales, like those silly stories of Lord Vader and the Force” (25).

In all, this is an easy read and can help get one prepared for The Rise of Skywalker.

What We Discover About the First Order in “Star Wars Bloodline”
Tags: Book, Resistance, The Resistance