After months of anticipation and multiple YouTube clips on the Star Wars YouTube channel, “Star Wars Rebels” finally kicked off this past weekend. With “Star Wars Rebels: Spark of Rebellion”, an hour-long special, having been shown on the Disney Channel on Friday, Star Wars is now kicking off its fifth-ever television show.

“Spark of Rebellion” greatly succeeds in accomplishing what seems to be its primary aim: establishing a sense of the rapport, camaraderie, and interpersonal relationships amongst the crew of the ship, Hera, Kanan, Sabine, Zeb, and Chopper in the light of possibly acquiring a new young kid, Ezra. Immediately apparent is the animosity that Zeb has towards Ezra, although the other crew members seem to take a liking to him, especially Hera, in a sort of friendly aunt way.

Ezra is the central character in “Spark of Rebellion”, a street-wise teenager who knows how to thieve, especially from The Republic, and finds that, in the course of trying to acquire some things for himself, runs into the aforementioned crew, who take him in. Most of the episode is about what Ezra does and how the crew interacts and reacts to him. It is also about how Ezra reacts to these totally different situations than he has faced (especially when he realizes that he is in outer space “I’m, I’m…in space!”, seemingly something he has never experienced), whether on a mission to the space station, but primarily in his reacting to helping the Wookiees.

It’s clear that he wants to be involved, initially, we see this when he goes to warn the fellow crew members on the space station when their transmission signals are being jammed.  We also see this at the end, when he gets dropped off at his planet and is offered a bigger experience than just stealing things from the Republic on his home planet and being resigned to staying on that planet for the rest of his life.

While he is a pickpocket and street rat, there is, nevertheless, something special about him, something about which we hear more than once, “Who is that kid?”  Indeed, as we see in the brief dialogue between Kanan and Hera (who becomes the champion of Ezra):
– Hera: “Kid sounds impressive.”
– Kanan: “You’re not thinking what I think you’re thinking.”
– Hera: “He held on to a crate of blasters with a pack of troopers on his tail.”
– Kanan: “Because I was there to save him. He’s a street rat: wild, reckless, dangerous, and….”

A couple of times, we hear of crew members comparing Ezra to a younger Kanan, such as when Kanan is telling Hera about the kid and she replies: “Very creative; sounds like someone I used to know”, clearly referencing Kanan and when Zeb tells Kanan: “Hey, I think you inspired the kid into doing something like you would do.” Not only are these references to a younger Kanan intriguing [about Kanan’s past and his maturing], but they also point to Ezra being capable of more than just a “street rat”, in Kanan’s words.

Above all, though, we see that Ezra possesses a connection to the Force and would be Jedi material (Hera: “He opened it; he passed the test.”). When Kanan tells Ezra that he has a strong connection with the Force, the latter inquires, “What’s the Force?” To which Kanan replies, “The Force is everywhere; it surrounds us and penetrates us; it binds the Galaxy together and it’s strong with you, Ezra. Otherwise, you would never have been able to open the Holocron.”

By the end, one can tell that everyone, to varying degrees has begun to accept Ezra and begun to take a liking, even Zeb does, even if he’s not willing to admit it. And Ezra, himself, has changed. Previously, he was only looking out for himself. By the end, he is helping out not only the others on-board the ship, but happily helping the Wookiees. It may be the first of many changes in young Ezra’s development. 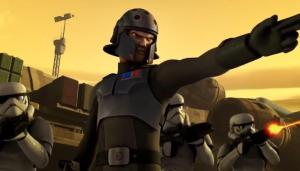 While “Spark of Rebellion” features Ezra and his joining the crew of this rebel ship, there are several other story lines and characters:

I very much look forward to the first season of “Star Wars Rebels”….

Kanan Reveals Himself to be a Jedi [Star Wars Rebels: “Spark of Rebellion”]

A Proper Introduction to the Inquisitor

Mandalorians and The Darksaber [Video]