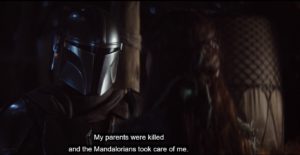 Omera: “How long has it been since you’ve taken that off?”
Dyn Jarren: “Yesterday.”
Omera: “I mean: in front of someone else.”
Din Djarin: “I wasn’t much older than they are.”
Omera: “You haven’t shown your face to anyone since you were a kid?”
Din Djarin: “No. I was happy that they took me in. My parents were killed and the Mandalorians took care of me.”
Omera: “I’m sorry.”
Din Djarin: “This is the way.”

What’s particularly striking about this interchange between Omera and Din Djarin is not just how long he’s kept his helmet on in front of others, but that he was taken in by the Mandalorians. From here, we glean [at least] three things: Din Djarin was not born a Mandalorian, the Great Purge may have affected non-Mandalorians, although it certainly didn’t only affect Mandalorians, and that Mandalorians took in foundlings.

When Cara Dune asks Din Djarin as to what the consequences would be for helmet-removal, Din Djarin simply responds that he can never put the helmet back on again.

Something I’ve been seeing on social media these past few days have been a bafflement surrounding this helmet-removal proscription, as it does not jive with the rest of Star Wars canon, specifically with Star Wars The Clone Wars and Star Wars Rebels in mind, as we see plenty of Mandalorians removing their helmets.

It’s true that what we’ve seen of Mandalorians in Star Wars The Clone Wars, as well as the 3rd & 4th seasons, not to mention the second season of Star Wars Rebels has been that they have no problems with helmet-removal. However, since Din Djarin is a non-Mandalorian foundling and was taken in, it could be that this group of which he is a member has special rules, especially with regards to foundlings.

We’re only halfway through this first season of The Mandalorian, so we have a lot more to learn, but Dave Filoni and Jon Favreau would not have foolishly stepped into such a mistake as to come into conflict with canon for this show, so I am very curious to see what will happen in the second half of the first season of this show!

What We Learned in the Season 1 Finale of The Mandalorian