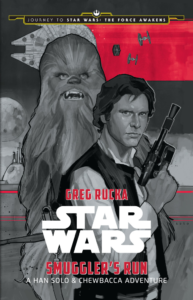 Yesterday, I finally took the time to read Smuggler’s Run: A Han Solo Adventure, a fall 2015 release that is meant for younger readers, perhaps pre-teen. It was something I was able to read in an afternoon, although it took more time to read than Mighty Chewbacca in the Forest of Fear.

Taking place immediately following the events in A New Hope, Han Solo and Chewbacca search for Lt. Ematt, who knows potential sites for Rebel bases, which is important, as the Rebels need a new base now that their base on Yavin IV had been discovered by the Empire.

It’s an exciting read, and can be great for reading for many ages. The primary story is accompanied by a prologue and epilogue that takes place in the time leading up to The Force Awakens, providing some insights into that movie.

This book came out simultaneously with Moving Target: A Princess Leia Adventure and The Weapon of a Jedi: A Luke Skywalker Adventure, all of which involve a prologue and epilogue taking place shortly before the events in The Force Awakens, and the stories of which involve an Original Trilogy character during the Original Trilogy. Moving Target is a thrilling story focussing on Princess Leia, providing a great setting-up for the events in Return of the Jedi, while Weapon of a Jedi is the story of Luke using his lightsaber for the first time, taking place between A New Hope and The Empire Strikes Back.

Each of these books involve not only Luke, Leia, Han, and Chewbacca, but also a character from The Force Awakens, providing an introduction to them, such as Ematt in our book, who is one of the top officers in the Resistance in The Force Awakens.

While it may not be significant as Moving Target is to broader storytelling in the Star Wars universe, it is an exciting and action-filled book. And it also provides some background for Major Ematt, as well as some background for Han’s and Chewbacca’s situation in The Force Awakens

The Mighty Chewbacca in the Forest of Fear is a Cute, Enjoyable Read
Tags: Book, Books