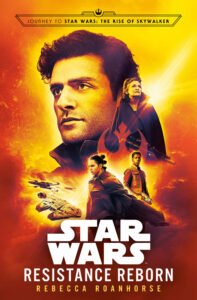 Taking place between the events of The Last Jedi and The Rise of Skywalker, Rebecca Roanhorse‘s Resistance Reborn follows the Resistance after Crait, as they look for new places to set up a base, although they temporarily settle on Ryloth in hiding, as the First Order’s power and might grows throughout the galaxy. While you can read the basic plotline on Wikipedia, the book focusses on General Leia, Poe Dameron, and the Wexleys (Snap and Norra), as they are involved in various operations. And, for whichever reasons, Rey is largely sidelined in this book. Also, this book seems to have taken place prior to Spark of the Resistance.

Here are five key aspects of the book I would like to highlight:

Leia’s Pain
In somewhat of a bridge between her incident of being shot out into space and recovering in The Last Jedi and her death in The Rise of Skywalker, we read of Leia’s ongoing pain (p. 11):

A sharp pain in her temple brought Leia’s thoughts up short. She squeezed her eyes shut in sudden agony. These headaches were a side effect of the healing process, the medical droid had said. She was to expect them to last for a few weeks, but between the headaches, the nightmares of being lost in space, and the grief of losing her friends and family, Leia was exhausted. What she wouldn’t give for just a moment of relaxation, of safety; a few days or even a handful of hours of knowing everything would be all right.

Rose and Finn…Was Just a Moment
Whatever happened to Finn and Rose, following their kiss in The Last Jedi? Well, apparently nothing, as Poe asks Finn about him and Rose, to which Finn responds, “We talked about it, and Crait was…a moment. But that’s it” (p. 183).

Poe Regrets His Mutiny, But Not Taking Out the Dreadnought
Poe’s actions in The Last Jedi were certainly notable and caused some interesting events to transpire, but he apparently did not regret going in to take out the Fulminatrix, yet he did regret his mutiny (p. 112):

Poe hadn’t known Paige Tico well, but her sacrifice was etched into his memory. He was responsible for her death, too. It had been his command that had sent Paige’s bomber over the dreadnought Fulminatrix, a decision that had taken at the First Order’s monster ship – but at the expense of Paige’s life, among others. So many others. Blood on his hands, and he wouldn’t forget it. He wouldn’t regret it; unlike his mutany, he still felt taking out the Fulminatrix was the right call. But he would not forget it.

Ransolm Casterfo Lives!
The most exciting element of this book was reading about the continued existence of Ransolm Casterfo, who had been just a dear character in the fantastic book Bloodline, and it was so thrilling to read of his continuing to live. I just hope they do something intriguing with him with future Star Wars books.

Wedge and Norra Wexley
Continuing their relationship from the Aftermath trilogy of books, Wedge Antilles and Norra Wexley are still around and still together, which is cute to read.

Conclusion
While this was neat to read of these aforementioned connections amidst books and movies (and significant connections with the Poe Dameron comic book series), I would only recommend this book for series Star Wars fans; I would not include this on any essential Star Wars book reading list.

The Beginnings of the First Order as Remnants of the Galactic Empire, as Told in “Star Wars Aftermath: Empire’s End”