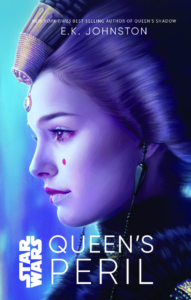 Let me start off right off the bat and just come out with it: Queen’s Peril is really enjoyable.

Starting with the coronation of Padmé as Queen Amidala, this book continues on up through the events of The Phantom Menace. Although it’s such a fantastic context to The Phantom Menace, what is so great about this book is that it provides really solid context and while it focuses primarily on Padmé and her becoming Queen Amidala, it also sheds a significant amount of light on her handmaidens, as well. There are even little glimpses about what Palpatine is doing a little bit with Darth Maul, as well as some other characters including Captain Quarsh Panaka, as well as his wife, Marieka. It really is quite enjoyable.

I didn’t really care for EK Johnston’s Queen’s Shadow, which was about the transition from Padmé as Queen Amidala to senator for one big reason: was even though the book was an interesting transition story, Johnston mentions the handmaidens with their own separate identities, yet it was unclear who each of them were. This book provides a backstory for them, which is really fantastic, not only in their naming, but also how Captain Panaka selects them and how they play their roles within the group of handmaidens.

It also sets up a really neat fascinating context for the trade dispute, which is really cool. And what it does for The Phantom Menace, it also inserts various narrative expansions of how different things take place throughout the course of the movie.

A couple other things that are interesting in this book is that it is perhaps the very first time in the Star Wars universe wherein we experience a girl having the onset of her of her menses. It also has some lesbian interactions, as well.

This is a this is a really good book and now I’m curious not only to read Queen’s Shadow, but also excited to re-watch The Phantom Menace.

Disclosure: An advanced review copy was provided to this author for review purposes.