Having just finished Claudia Gray’s most recent Star Wars novel this week, I am happy to share that it was enjoyable!

Taking place before the events in The Phantom Menace, Master & Apprentice focusses on an occasion where Qui-Gon Jinn considers joining the Jedi Council and leaving Obi-Wan Kenobi to find another Jedi master under whom he can serve as a Padawan. This book shows Jinn and Kenobi not having a smooth of a relationship as they had in The Phantom Menace, so this is really neat to see how things turn around for them. This book is among the new explorations of the Republic era prior to The Phantom Menace, along with the Darth Maul comic book and the Dooku: Jedi Lost audiobook (which I am currently in the midst of listening). 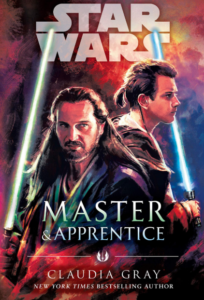 Story
The main story of this book takes place on a planet called Pijal and centers around the coronation of a teenage princess, Princess Fanry, whose regent is a curious Jedi, Rael Aveross, to whom I will return in a moment. Involved in a long-term relationship with the Czerka Corporation, there are threats and dangers to both the queen’s coronation and the business relationship with Czerka, which is how Jinn and Kenobi get dispatched to Pijal to help out to make things transition smoothly. There are other key characters involved, including a couple of precious gems dealers, Rahara Wick and Pax Meripher, who play a helping role in this story along. But none as curious as Aveross.

Rael Aveross
Aveross is quite the character, as we see him wearing thread-bare clothes, cavorting with a local taverness, and drinking up a storm. Aveross was Dooku’s Padawan prior to Jinn, which provides some intriguing interactions amongst them and further understanding of their Padawan-Master relationships with Dooku, as well as with their own Padawans. One curiosity about him is that the book describes him as retaining an accent from his native planet, which I was trying to figure out what that accent could be. As I am now listening to Dooku: Jedi Lost, Aveross appears there, as well, and evinces an accent from the American south, perhaps a Texan accent(?), which is a rare occurrence of a southern twang in Star Wars audio or video content.

Obi-Wan Kenobi
We get to see a young Kenobi for the first time, yet he already has a maturity to him: “In many ways, Obi-Wan was so mature for his age, so steady, that Qui-Gon sometimes forgot he was just seventeen years old” (19). We read of Kenobi’s fondness for flying, which baffled me, as I hadn’t recalled Kenobi enjoying flying ships, until an incident later on Master & Apprentice changes his mind. We also read of Kenobi’s first time ever riding a varactyl, which he rides ably in Attack of the Clones. One other bonus we get in this book is a brief scene that takes place with Kenobi reflecting on the loss of his master at the hands of Darth Maul during Jinn’s funeral pyre and learning that that he had received a “hasty field promotion” to Jedi Knight,Master & Apprentice Provides Insights Into Obi-Wan Kenobi’s and Qui-Gon Jinn’s Master-Padawan Relationship which is a nice little retconning.

For instance, we read that Qui-Gon Jinn and Dooku had a particularly good Padawan-Master relationship (19):

But he had forged a powerful bond with Dooku well before they’d been together for a year. Most Masters and apprentices did. … It was Dooku who had guided Qui-Gon through the ancient Jedi prophecies, igniting interests in ancient history and linguistics that would long survive his fervent belief in the mystics’ foresight. Besides that, they’d shared so many personality traits: self-reliance, skepticism, and a reluctance to take the Council’s word as sacred.

They’d been an uneasy match from the start, with misunderstandings and emotional swings. That in itself wasn’t unusual. Qui-Gon sometimes questioned why Padawans were transferred from the crèche to their Masters in the middle of most species’ adolescence – exactly when every change became more difficult. (He, like Dooku and Yoda and Yoda’s old Master before him, had taken a younger Padawan; Obi-Wan had become his apprentice at thirteen. This had not helped.)

Learning About Jedi
Because there is a focus on the Jedi Order in this book, we get to partake of some gems concerning what the Jedi and their Order, such as their thinking time and the Jedi Temple (49):

Many Jedi went on retreat for deeper contemplation, but the Temple possessed its own reserves of tranquility. Chambers on the higher levels had translucent windows open to the sunlight, where one could drink in the heat and radiance and utter quiet. On a lower level, a meditation path wove its way through a maze of stonework, inviting the mind to focus. Sensory deprivation pods for various species could be filled and sealed, for those who wanted to all but shed their physical forms and become pure spirit.

We also get to read of something quite curious concerning Jedi and their relationships, which was surprisingly revelatory for me, with Aveross speaking to Jinn (120):

“Falling in love – that’s what the Jedi Code forbids. Getting laid? Not so much, not if it’s casual, like me and Selbie. That doesn’t compromise my emotions, doesn’t divide my loyalties, anything like that. I might’ve broken the letter of the law, but not the spirit. On Felucia, you broke the spirit of the law into a dozen pieces.”
Qui-Gon tensed. These words cut deep – or the memories did.

One other nugget we read in this book concerns what makes lightsabers so special for Jedi, with Kenobi providing the answer to this question (143):

“They’re far from the only tool we have at our disposal – but in combat, a lightsaber is an unparalleled weapon for both attack and defense. And because using the blade requires immense concentration and keen reflexes, no one but a Force user can wield lightsabers skillfully or efficiently.”

Force Visions and Prophecies
A significant aspect of Master& Apprentice is Force visions and prophecies. We read of Dooku sharing holocrons of ancient Jedi prophecies with Jinn and getting him interested in the subject, as well as experiencing Jinn having some Force visions of the future. What’s particularly interesting to me is that these Force visions are also something that occur in Dooku: Jedi Lost, so it is now a thing.

Conclusion
Claudia Gray turns in another solidly enjoyable book which helps us not only understand Jinn’s and Kenobi’s Padawan-Master relationship, but also Jinn’s relationship with Dooku, their interest in ancient Jedi prophecies, more about the Jedi Order, and also about Force visions for the future. I highly enjoyed it and it definitely added nice retconning context to The Phantom Menace.