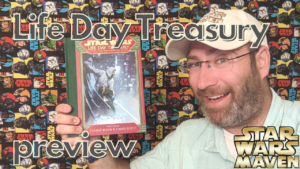 While Life Day was introduced in Star Wars with the 1978 movie The Star Wars Holiday Special, when that movie was no longer officially considered canon in 2014, Life Day seemed to have gone by the wayside. However, with the new book, Star Wars Life Day Treasury: Holiday Stories from a Galaxy Far, Far Away, hitting bookshelves in two days on September 7th, Life Day has returned to Star Wars canon.

Although Chewbacca’s father was known simply as “Itchy” in the Holiday Special and Chewbacca’s son was known simply as “Lumpy”, they are identified with their full names in Star Wars Life Day Treasury: Attichitcuk and Lumpawarrump. While not appearing in Solo: A Star Wars Story, Attichitcuk was mentioned as being Chewbacca’s father in that movie. While Lumpawarrump was mentioned previously in The Mighty Chewbacca in the Forest of Fear!, he actually has appeared previously once before in Aftermath: Empire’s End. It should be noted that “Lumpy” no longer wants to be known with that nickname, and now he wants to be known as “Waroo”. Additionally, we see Chewbacca’s wife, “Malla” or, as she is known here, Mallatobuck (she previously appeared in A New Hope: The Princess, the Scoundrel, and the Farm Boy). Nevertheless, it is wonderful to see them coming together back where they all began: with Life Day on Kashyyyk.

While Life Day has not played much into Star Wars canon, it was mentioned early on in the first episode of The Mandalorian, and has appeared in a couple issues of Star Wars Adventures earlier this year. And there will be a focus on Life Day in the forthcoming Star Wars: Life Day.

Interestingly, the introduction provides a lot of context around Life Day, both on Kashyyyk and beyond:

While it began on Kashyyyk, it spread throughout the galaxy:

Many planets and cultures have midwinter celebrations of their own, born from ancient times when people huddled on the coldest of nights, dreaming of the warmth of days to come. On Coruscant there is Solstice Tide; on New Alderaan there is the Festival of Winter’s Heart. The Ewoks of the sanctuary moon of Endor tell tales of the White Fall, while the Mon Calamari celebrate the Turning of the Year’s Tide. (viii)

What characterizes these celebrations are some similarities:

Whatever the lore, the celebrations themselves bear startling similarities, Gifts are exchanged and loved ones dine together, sharing feasts both grand and humble. There are songs and there are games. Dwellings are decorated and traditions observed, but most of all there are stories shared with friends and relatives around crackling fires and flickering glow rods. (viii-ix)

In addition to the stories are accompanying drawings by Grant Griffin. The target demographic of this book is 8-12 year olds and what’s neat is that one need not be that familiar with the Star Wars universe to appreciate these stories. This book would serve ably as a winter holiday gift to a young fan.