We learn a lot more about Jedha, one of the planets in Rogue One in a soon to be released book. The new book, Guardians of the Whills, a middle-grade novel written by Greg Rucka, follows Chirrut Îmwe and Baze Malbus after the Empire’s takeover of Jedha and the arrival of Saw Gerrera. Coming out on May 2nd, the book takes place in the months leading up to the events in Rogue One. 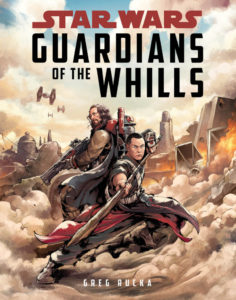 In this book, we get some insights into what’s going on on the ground in Jedha, including regarding the Imperial involvement there. Here are seven significant aspects of what we discover:

People went armed all the time throughout the Holy City, had done so even before the Empire’s arrival, and carrying a weapon wasn’t – in and of itself – an issue. But he had no idea if any of the troopers in front of them at this moment might recognize the Morellian blaster cannon that Baze now considered right and truly to be his own, nor if, upon recognizing it, they might wonder where he’d acquired it or even want it back.

2) The Imperial Star Destroyer had been in high orbit and stormtroopers were garrisoned there, due to the lack of space in the Holy City

Stormtroopers were garrisoned primarily aboard the Star Destroyer currently in high orbit above Jedha. The massive ship had declared the Empire’s arrival, remained above ever since. At night, when the Holy City went dark, Baze could look up and find it in the sky, distant and glowing and constant – an unmoving satellite, like an omniscient, distant eye keeping watch.

The stormtroopers on deployment were shuttled down to the surface either on troop transports or with returning cargo ships after they’d delivered their payloads. The Holy City itself had only a single spaceport, but the facility was overcrowded and out-of-date, built long ago to sustain the pilgrim and tourist traffic to the planet. The very geography of the Holy City made expansion or additional upgrades to the port impossible – the city, built on a mesa rising out of the desert, simply had no room to expand.

The Empire, of course, had assumed control of the spaceport upon arrival. (27)

3) The Imperials stripped the Temple and barred anyone from entering

The Imperials stripped the Temple of its artifacts, of its history. They barred the doors and posted stormtroopers around the perimeter, forbidding entrance if not forbidding devotion. The Disciples of the Whills who had worshipped so diligently for so long had been cast out, and the Guardians who had watched over them with the same vigilance alongside them. Now, as far as Chirrut knew, all that remained of those who had tended the Temple of the Kyber in NiJedha – in the Holy City – were a paltry handful of Disciples of whom Silvanie Phest was one, and two Guardians of the Whills with nothing left to guard and who were too stubborn to abandon their home.

Or, if you were to listen to Baze Malbus tell it, one blind Guardian and his long-suffering friend. (4)

4) Orphans had increased since the Empire got involved on NiJedha

Before the Empire had arrived, there had been no real orphanage in the Holy City. Before the Empire had arrived, there had not been a true need for one. Children left orphaned through accident and tragedy had almost universally been cared for by other families in the community or, in some cases, by members of one sect or another, brought to live in the Dome of Deliverance or at the Temple of the Kyber or the Waiting of Night or any of the other places of worship. Between the community of faith and the community of the Holy City itself, there had always been someone willing and able to help.

Now the temples were barred and the communities of faith scattered, and where there had been homes and families there were refugees and orphans. Every day there were more of each. Refugees displaced by the Imperial occupation. Children orphaned by the slave labor of the kyber mines, their parents crushed or buried or worked to death under the Imperial boot. Children orphaned by stormtrooper blasters or insurgent bombs. Children orphaned by parents who had managed to steal aboard a freighter or a transport, desperate to flee Jedha, leaving with every intention of returning for their families once they had made it to safety, to security, to freedom.

Chirrut had yet to hear of any who had actually come back. (47)

Chirrut himself had been wrestling with this very question for weeks now. The fact was simple, and one didn’t need working eyesight to recognize it: Gerrera’s arrival on Jedha had made a bad situation worse.

Before, there had been scattered insurgents, any affiliation between them loose at best. There was no coordination, and to be honest, very little in the way of tactics or even skill. But one of the things Chirrut had understood after their initial meeting with Tenza and Fortuna two months prior was that he and Baze were not the only people to whom Gerrera had made overtures. The man had done his homework; he had sent agents to Jedha before his arrival, had done so far enough in advance that when he arrived, those agents had been able to present him with fairly accurate intelligence as to who might be worth recruiting and who might not. The result was that there were few independent insurgents left in the Holy City. One way or another, if a sentient wielded a weapon against the Empire, they were doing it on behalf of Saw Gerrera. (139)

6) The situation was dire

7) Life in the Holy City had never been easy

But there, too, had been peace, and generosity, and comfort, and warmth. There had been families bound by love, and honest beings who did honest work. There had been the respect of sentients for one another, all bound by the understanding that they lived their days in a rare and precious place in the galaxy, a place that meant so much to so many. There had been the devoted attendants of countless faiths, all dedicated to the veneration of the Force in their own ways. From the Brotherhood of the Beatific Countenance to the Phirmists to the Weldsingers of Grace to the followers of the Central lsopter and more, and of which the Disciples of the Whills were but one, though perhaps one of the most prominent due to their place in the Temple of the Kyber.

There had been, as Chirrut perceived it, a balance.

The Empire had ruptured that. It took, and claimed to bring in exchange “order.” In truth, Chirrut and Baze both understood this was a lie; the Empire returned nothing. The imbalance rippled in every conceivable way. Where once there had been a steady stream of pilgrims and tourists, now there was barely a trickle. Where once the kyber crystal mines had made modest profit for those who worked them, now the Empire tore open gashes in the surface of Jedha, greedy for more and more. This, in turn, brought more pollution and filth into the atmosphere. Food and clean water, never abundant but always adequate, became scarce, and in some cases toxic. Illness and injuries became commonplace. Medicine and healers diminished.

People grew desperate, and the stormtroopers answered that desperation with violence. Violence was returned in kind. Scattered insurgencies sprang to life, unaffiliated and loosely guided, striking back at the Empire out of anger. The constant sound of the cargo transports overhead was joined by the grind and hum of armored personnel carriers, of the clatter of armor, of the sound of weapons being readied, being aimed, being fired. Homes were destroyed, and the refugees left in their wake did their best to flee, and if they could not flee, simply to survive.

The suffering was everywhere; less for some, greater for others, but touching in some way, in some fashion, all who lived on Jedha.

It made Baze, who had nursed an anger all his own for so long, even angrier.

It just made Chirrut sad, and all the more determined to keep his faith in the Force and to find a way to ease the suffering of those around him. (7-9)

To read more about Jedha, as well as Chirrut Îmwe, Baze Malbus, and Saw Gerrera, check for Guardians of the Whills on bookshelves on May 2nd.

*Pagination reflects that of the 2017 Disney/Lucasfilm Press hardcover version.

A copy of this book was provided to the author for review purposes.

The Beginnings of the First Order as Remnants of the Galactic Empire, as Told in “Star Wars Aftermath: Empire’s End”
Tags: Books, Guardians of the Whills, Jedha, Rogue One, Saw Gerrera