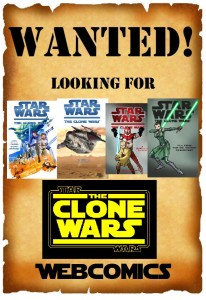 Last week, having met Tom Hodges at the fifth annual Long Beach Comic Expo, I realized I wanted to track down the webcomics that accompanied the first few seasons of Star Wars: The Clone Wars.  Having decided to re-watch Star Wars: The Clone Wars, I remembered that all of the episodes of the first season were introduced by a webcomic, which helped set the scene and provide a bit of a background to the episode, itself.

Now that I am re-watching the series, I found that StarWars.com had taken down not only the webcomic that accompanied the first season, but also the other Star Wars: The Clone Wars webcomics.  In addition to webcomics that took place alongside the second season, “Act on Instinct“, and the third season, “The Valsedian Operation“, there was also a three-part season-bridger, “Hunting the Hunters”.

This is quite unfortunate and frustrating that StarWars.com has decided to take down these webcomics, especially since they helped fill in some of the details of the story.  Thank God, however, for the Wayback Machine: the first season is preserved – although the quality is not so high at many places, which makes the words hard to read (not good), “Act on Instinct” is mostly preserved (but not all of it), and I can’t seem to be able to access “The Valsedian Operation”. There is a little light in this tunnel, however: the first season seems to be available for sale in paperback…. (to be continued)

An Initial Assessment of the First season of the Star Wars: The Clone Wars Webcomic