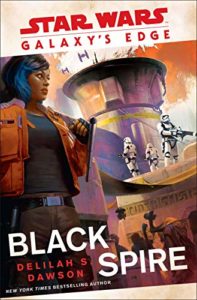 Having read and enjoyed Star Wars Phasma (which includes the telling of how she gets her shiny armor), I was curious to read Star Wars Galaxy’s Edge: Black Spire, which follows the two main non-Phasma characters of Star Wars Phasma, Vi Moradi and Captain Cardinal, after the events of The The Force Awakens and The Last Jedi.

The book focusses on the mission that General Leia Organa charges Moradi with, which is (p. 8):

to go to Black Spire Outpost on the planet Batuu, establish an outpost for the Resistance, and collect as much support as possible among the locals and visitors. We need bodies. We need friends. We need skills. We need ships and food and fuel. We need eyes and ears on the ground. We need a place we can go if everything falls apart, a place so far off the map that the Frist Order has forgotten it even exists.

While the first two chapters take place on D’qar base prior to the events in The Force Awakens, the remainder of the book takes place four months later. Most of the book takes place on Batuu, following Vi Moradi’s striving to build a Resistance base on Batuu. However, the curveball is that she doesn’t begin with all of her equipment on Batuu, making it extremely challenging to get her operations going.

One of the neat insights in the book is that we get a sense of the Resistance’s condition following The Last Jedi (p. 17):

After the Hosnian cataclysm, the Resistance was thrown into utter chaos. And after the Battle of Crait, it was nearly destroyed. Their ships and officers were gone, Leia almost died, and Luke Skywalker saved what was left of their crew only to pass into the Force himself, leaving the Jakku scavenger, Rey, as their only hope. With nothing left of their fleet but the Millenium Falcon and no allies rallying to their call, Leia contacted all her spies and gave them new orders: Hide. Recruit allies. Gather ships. Collect fuel and weapons. Rebuild. Go far away from the target on my back and find a way to help us get on our feet again.

I will say that this book did not capture my attention as Star Wars novels go, so beware if you actually do plan on reading this book. Nevertheless, the book is well-written with a story focussed on Vi Moradi’s team-building.