A recent book released last month aimed at teenagers is Force Collector, written by Kevin Shinick and published by Disney/Lucasfilm Press, and it’s an interesting read. It follows Karr Nuq Sin, a teenage boy in high school who has psychometric powers (similar to Quinlan Vos), although he’s not really sure what it is. Karr’s grandmother encourages him to explore it further and to see what he can do with those powers. He is convinced that they are some sort of Jedi power, although the struggle that he faces is that no one seems to know of or believe that Jedi ever existed.

This book takes place immediately before the events of The Force Awakens, and no one is aware that the Jedi ever existed, at least not on Merokia, where Karr lives. People think it’s weird whenever he brings Jedi up. The main problem Karr encounters is that when he touches certain objects that have experienced significant events, he can envision what happened and it also leaves him physically affected.

When he meets Maize Raynshi, a new student to his school, she completely does not believe him: “She scoffed. ‘The Jedi were a story the Republic made up. They used it to keep order in the galaxy – and by scaring everyone with the idea of a magical army of space wizards’” (21).

However, Maize decides to go exploring with Karr in her father’s ship. He doesn’t even notice the lack of his ship, since he is an officer in the First Order and is offworld. Maize and Karr fly around the galaxy to significant worlds familiar to Star Wars fans, such as Jakku, Utapau, and more. 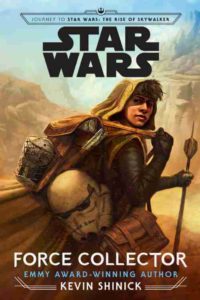 Condition of the Millenium Falcon in The Force Awakens

We see some interesting things along the way, including this interesting quote about the condition of the Millenium Falcon (135):

Karr led the way into the belly of the ship. It wasn’t exactly what he’d expected, and he tried very hard to keep from feeling disappointed. The interior was grimy but mostly intact, and it looked exactly like the kind of small, slapdash craft that had been popular a generation before . . . but these days, it probably couldn’t hop between two planets in the same system without blowing a circuit. Not without a lot of help.

It wasn’t the rust, because there wasn’t much. It wasn’t the dated equipment or the exposed panels or the strange stains. It wasn’t even the stale, warm smell of something dark and dry and abandoned.

Or maybe it was. Maybe it was all that, and then some-a once proud craft, left to rot under a canvas sheet in a nowhere outpost on a desert planet. Nobody cared about any of it anymore.

We read some intriguing insights into Black Spire Outpost and Batuu, such as the rule of law is left up the inhabitants, as Karr’s droid, RZ-7 describes it (196-197): “There’s not a great deal of…shall we say…rule of law on Batuu. People come and go as they like, without the eye of the First Order. Or anyone else.” Black Spire Outpost doesn’t have a whole lot to it, as RZ-7 describes it further (197): “As I understand it, the outpost consists almost entirely of a spaceport, a cantina, a market, and a merchant row.” We also read of the broader Batuu (198):

Outside the spaceport, the world of Batuu was a bright blend of civilized and wild. The Outpost was surrounded by forests and hills, punctuated with the spires of giant petrified trees that gave the settlement its name. The sky was vivid blue, the forest treetops were brilliant green, and the market was a loud rainbow of stalls, squares, and alleys that held everything anyone could ever hope to buy. Legal or otherwise.

The most fascinating piece in the book, in my humble opinion, is this message that Karr discovers (179-180):

“This is Master Sifo-Dyas, en route to the desert moon that orbits Oba Diah. I’m with . . . with”-an explosion rocked the ship, if that’s where he was recording the message-“Silman, flying emergency survival capsule number seven-seven-flve-flve-one-nine, and our long-range transmitter has been knocked out. We’re under attack by the Pykes, and I’m preparing to jettison this projector in hopes that it will he found and-” The next few seconds were garbled.

Sifo-Dyas came back into focus. “And the truth is, we won’t make it out of this alive.” He looked exhausted and frightened, but determined. “If that’s the case, so be it. But there are things that mustn’t be lost. This what it’s come to–and I want . . . I want everyone to understand that I’ve done my best. Some may disagree with my methods, but these are desperate times and someone, somewhere should know: as you are aware, I have seen a vision of the future that I feel warrants an army. You’ve disagreed with me, but I felt I had no choice. Therefore, I have ordered one: a clone army from the Kaminoans. Something must be done, and I made that decision. It may haunt me, and” -more static, garbled shouts from someone else in the shuttle-“or then again, maybe I won’t have to live with that decision very long at all.”

This is really cool, in general, to read of this explanation from Sifo-Dyas, which expands what we saw in “The Lost One” (my favorite episode of season six of The Clone Wars).

Throughout the book, which you are very welcome to read and I don’t want to spoil the story in this post, but we see Karr exploring and developing his psychometric power using the Force, as well as discovering himself and about his family in the process. It’s an easy read and enjoyable, which provides interesting insights into previous eras and different events within the Star Wars galaxy.