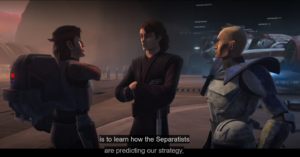 In the second episode of the final season of Star Wars The Clone Wars, “A Distant Echo”, which was just released this weekend, we see something very similar in what happened in the previous episode of the Bad Batch story arc, in that most of the episode remains story-wise the same as the original story reel version that was released in 2015 (both at Star Wars Celebration Anaheim and, subsequently, online), yet with some slight changes at the outset. While the changes don’t affect the plot, they seem to affect the character development.

Changes in the Discussion of the Mission
In the original, story reel version, we see Anakin, Hunter, and Captain Rex are walking in the hangar:
Hunter: “So, we have a new mission, Captain?”
Captain Rex: “Yes, we’re going to follow the trail of the algorithm to Skeko Minor.”
Anakin Skywalker: “Rex believes we’ll find Echo, an ARC trooper who was missing in action.”
Hunter: “Well, that’s a pretty covert operation, I’d say. I suggest we use our transport. Not the most luxurious ride in the galaxy, but it doesn’t exactly scream ‘Republic’ like the rest of these.”
Skywalker: “Sounds like a good plan to me.”
Kenobi then comes walking up, and says, “Sounds like a dubious plan to me. Am I to gather the rescue mission just proposed to the Council – the one they rejected – is going forward?”
Hunter: “Um, I’m going to be on the ship with the team if you need me.”
Kenobi: “From Anakin, I expect this type of disregard for authority, but Rex, I’m surprised you’d be involved in such a reckless plan.”
Rex: “Actually, sir, this mission was my idea. If Echo is alive and being held hostage, we can’t just leave him there.”
Kenobi: “If he’s alive. Your intentions are honorable, Rex, but defying the Council’s orders for a personal crusade on a neutral planet, no less, that is not advisable.”
Rex: “With all due respect, general, this is not just a personal crusade. Even if the Separatists don’t have Echo, they still have my algorithm, which gives them a tactical advantage here on Anaxes and maybe every battlefront.”
Anakin: “Master, it’s a simple snatch-and-grab mission; we’ll be in and out before the Council even knows we’re gone.”
Kenobi: “I can see that I’m not going to be able to talk you out of this, so may the Force be with you.”
Kenobi then walks away, leaving Rex and Anakin to then go join up with the rest of the team. 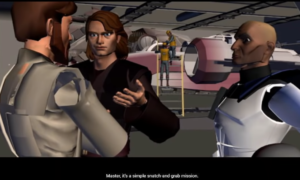 In the newly-released version, we see Hunter, Captain Rex, and Anakin Skywalker walking in the hangar:
Hunter: “Word is the general staff isn’t completely behind this mission.”
Captain Rex: “I admit the idea that Echo is still alive is a long shot.”
Anakin Skywalker: “I’m sure the Council will approve the mission. Just remember the primary goal is to learn how the Separatists are predicting our strategy, whether it’s Echo behind it or not.”
Hunter: “Well, if you want my opinion, sounds like a trap, but me and the boys will tag along anyway, if only to say ‘I told you so’.”
Skywalker: “Just make sure you’re ready if we get the go-ahead from General Kenobi.”
Rex: “If you’re certain he’ll approve the mission, why wait? Let’s get going!”
Skywalker: “First, we have that thing to do.”
Rex: “Uh, what thing?”
Skywalker: “You know.”
Rex: “We don’t have time for that, sir.”
Skywalker: “Yes, we do.”
Hunter: “Well, I’ll just let you two sort this out. I’ll be waiting on the ship with the rest of the team.”
Skywalker: “Come on, Rex. I’m late as it is.” 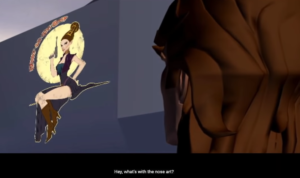 Changes Regarding Padmé
A bigger difference, however, is what comes next. In the original version, as they are entering the ship to load up and out for their mission, Anakin sees the nose art of the ship and sees that it’s Padmé with a blaster and her legs completely exposed, much like American bombers in WWII having nose art.
Anakin: “Hey, what’s with the nose art?”
Hunter: “That’s our girl, the Naboo senator. We check her out on the holoscans.”
Wrecker: “Yeah! She can negotiate with me anytime. Mahaaa!”
Captain Rex: “Um, let-let’s get aboard.”
Anakin, very unhappily: “That is not staying there!”

I recall this scene at Star Wars Celebration Anaheim 2015 receiving a lot of amusement and laughter from the audience. It was quite the amusing moment, wherein we see Padmé having soldier admirers, yet Anakin being very unhappy about it. This scene, however, is completely erased in the new version, and replaced with an amusing character development sequence. We see Anakin Skywalker alone in the barracks communicating by holo with a visibly pregnant Padmé, while Captain Rex stands guard outside:
Padmé: “You’re late again.”
Anakin: “Padmé, I’m so sorry. We didn’t anticipate the Outer Rim Sieges would last this long.”
Padmé: “That would be why they call it a siege, Anakin.”
Anakin: “I know, I just thought that I-”
Padmé: “You thought you could bring a swift end to the conflict single-handedly.”
Anakin: “Yeah.”
Padmé: “Anakin, what you’re doing is important. The Republic needs you on the front lines just as they need my voice in the Senate.
Anakin: “I know.”

We then see Obi-Wan Kenobi approaching the barracks, whereupon Captain Rex sighs, “Oh, great” and knocks on the door to signal to Anakin that Kenobi is arriving.
Padmé: “What is it?”
Anakin: “Obi-Wan is coming.”
Padmé: “No, that’s not it. There’s something else.”
Anakin: “It’s Rex. I’m worried he’s letting his personal feelings drive him too much on this mission.”
Padmé: “I wonder where he learned that.”

Kenobi approaches Rex:
Kenobi: “Rex, where’s Anakin? I need to speak to him about this mission.”
Rex: “Well, General, he’s, um…”
Kenobi: “Well, he’s inside your barracks, isn’t he?”
Rex: “Yes, sir.”
Kenobi: “What’s going on here?”
Rex: “Oh, nothing, sir. I was just waiting for the General uh, General.”
Kenobi: “You’ll have to do better than that, Captain.” 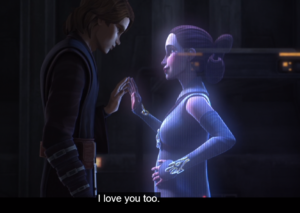 Back to Padmé and Anakin:
Padmé: “You’ve known Rex a long time. When you throw caution to the wind and take chances, where is he?”
Anakin: “Right beside me.”
Padmé: “Then maybe that’s where you should be for him, Ani. Trust his instincts like he trusts yours.”
Anakin: “I’m just trying to look out for him.”
Padmé: “I know you are. I love you, Ani.”
Anakin: “I love you too.”

Kenobi: “Then what is Anakin doing in there?”
Rex: “Ah, he’s spot-checking my gear, sir.”
Kenobi: “Really? Without you?”
Rex: “W-Well…”
Anakin: “Here you go, Rex. And try not to break it again.”
Kenobi: “Anakin, about this mission, the Council thinks-”
Anakin: “That it’s a good idea? I agree. Let’s get moving, Rex.”
Kenobi: “No, wait. That’s not-”
Anakin: “No time.”
Kenobi: “I hope you at least told Padmé I said hello.”
That, at least, gets Anakin to look back at Kenobi.

This replacement sequence is amusing to see Captain Rex’ development, as well as Kenobi’s knowledge of Anakin. Of course, it’s also a nice touch to see a tender moment in the relationship between Padmé and Anakin. This was all set-up, of course, by the amusing dialogue between Anakin and Rex about “the thing” and it being a ruse for the communicating.

Conclusion
While replacement scene adds some character development, I do very much miss that brief nose art scene. While I do miss Hunter’s mentioning their non-Republic-looking ship, I do appreciate the new line about “I told you so”, which is a humorous motivation for the Bad Batch.

We shall see if/how there are any further changes in the next two Bad Batch episodes….

Excited for Upcoming Season of Star Wars The Clone Wars!