The big Star Wars news of the past 24 hours is quite intriguing! Beginning April 2nd, Disney Plus will be adding a bunch of non-canon material, largely animated. According to the announcement, the following TV shows and movies will be available for streaming:

For those less familiar with these titles, Caravan of Courage and Ewoks: The Battle for Endor are made for TV movies in the aftermath of Return of the Jedi, as these movies involve children and Ewoks on the forest moon of Endor where Ewoks reside, having been released in the years subsequent to ROTJ, in 1984 and 1985. I didn’t say these were good movies, but if you’re looking for Ewoks content, especially kid-friendly, then this might be worth watching.

Speaking of Ewoks content, the mid-1980s television show Star Wars: Ewoks, which contains three dozen episodes, provides even further Ewok fun. Curiously omitted – and I don’t know why – is the other mid-1980s television show, Star Wars: Droids: The Adventures of R2-D2 and C-3PO, which barely lasted over a dozen episodes. That is a fun little show (for more, see my initial observations on the show, as well as seven interesting tidbits about it; and, of course, it features a cartoon appearance of Boba Fett).

Speaking of cartoon appearances of Boba Fett, The Story of the Faithful Wookiee is a title I had to look up, but it’s the good segment from the Star Wars Holiday Special, the animated segment that features Boba Fett’s first on-screen appearance. It’s short and worth your time. 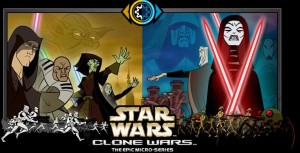 Finally, we get to Star Wars: Clone Wars. In addition to having written about season one, season two, and season three, as well as podcasting about season one, season two, and season three on Skywalking Through Neverland (as well as composing a top ten highlights of the series), I am excited about this. Granted, I already own the DVDs, but I loved this series back when it was released between episodes II and III, bridging the two films. And, yes, I was bummed when it became no longer canon, but it’s still an enjoyable series that could be easily viewed within the course of one evening.

I am excited that these titles are now on Disney Plus and I am excited to see what further Star Wars content comes to the streaming service.