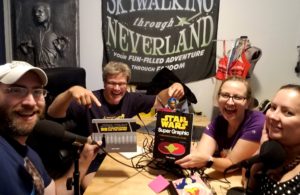 On the newest episode of Skywalking Through Neverland, I had the pleasure of discussing a couple of new Star Wars books.

Along with fellow guest Nitzan Harel, we joined the hosts of the podcast, Sarah & Richard Woloski, in discussing 99 Stormtroopers Join the Empire and Star Wars Super Graphic: A Visual Guide to a Galaxy Far Far Away published by Chronicle Books.

As you can hear in our discussion from 1:21:45 through 1:42:52 on the podcast, 99 Stormtroopers Join the Empire is a book that humorously shows the demise of 99 imperial stormtroopers in scenes that take inspiration from Eps. I-VII and Rogue One, while Star Wars Super Graphic has nearly 100 graphic depictions of information from the films, television shows, and more.

My First Podcast as the Book Analyst for Skywalking Through Neverland

First Time Reviewing a Book on Skywalking Through Neverland!

Star Wars: From a Certain Point of View

How Did Captain Phasma Get Her Chrome Armor? [Video]