Continuing on in my Darth Maul exploration project, brings us to season 4. In season 3, we discover that, to everyone’s shock, Darth Maul is still alive!  Towards the end of Season 4, Savage Oppress finds him, albeit not totally well, and brings him to be rehabilitated by Mother Talzin, which gives rise to a new Darth Maul (Darth Maul 2.0?).  What do we learn about Darth Maul in this discovery and rehab? 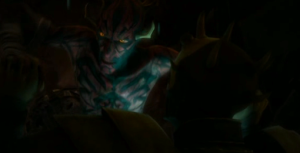 In the penultimate episode of season 4 (4.21 “Brothers”), Savage Oppress tracks his brother down to Lotho Minor, a junk planet, with very few living creatures.  Eventually, he finds him beneath ground, albeit in a state not so healthy.  He is rather spider-like, with his top half intact and spider-ish legs for his bottom half.  His mental state is much worse than his physical state.  We do not discover how or why he got the mechanical spider legs or who affixed them to him.  We also do not know why he chose to go to the very tough planet of Lotho Minor. 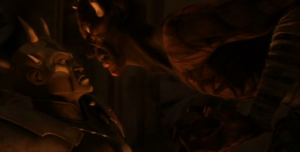 Lotho Minor is a strange place, with seemingly very few living creatures, so there’s not a lot for Darth Maul to eat.  However, one thing seems quite clear: he chose to go there to get away from it all.  He could have gone to the underworld of Coruscant or reconnected with former associates.  How come he did not return to Lord Sidious for help or even Mother Talzin?  To these questions, the answers are not found in Star Wars: The Clone Wars. 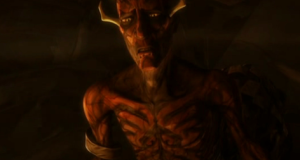 When Savage Oppress realizes this creature is Darth Maul, he calls him “brother” and Darth Maul runs away in utter denial:

It seems as if Darth Maul does not want to be reminded of anything to which he is connected and is stable with his current situation. 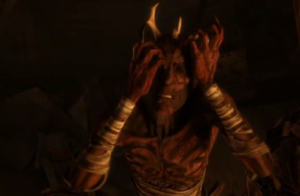 When Savage Oppress asks him how long he’s been there, Darth Maul responds, “Years and years and years. Now that my chains have been broken, the chains are the easy part.  It’s what goes on in here,” pointing to his head, “that’s hard.” Inasmuch as Darth Maul has been physically broken (split in half!), he is mentally and emotionally quite destroyed, which is painfully evident. As Eric Goldman put it, Darth Maul “truly came off as broken and demented. There was a moment where he collapses into a sound that is half laughter, half sobbing that really sold that this guy was truly messed up, Goldman continues: “Overall, this depiction of Darth Maul as someone truly damaged, both physically and mentally, by what he went through, was a smart way to bring him back.” 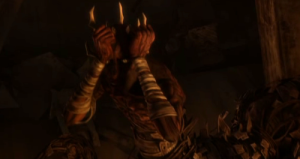 Savage Oppress then inquires: “You have been lost, my brother.  Do you remember who you are? Where you came from?” This leads into the following dialogue:

Savage Oppress: “Brother, what is it? Brother, what are you saying?”
Darth Maul: “Jedi!  Revenge. I must have revenge.”

Immediately following this, we see a scene in the Jedi Temple in which Yoda senses the disturbance in the Force that Darth Maul is still alive and summons Obi-Wan Kenobi to tell him, who is horribly shocked at this revelation.

This dialogue is how the episode ends.  One element (of many) which is fascinating here is that, despite the Dark Side (okay, Lord Sidious) clouding much of the Jedi’s (and, specifically, Yoda’s) ability to sense what is going on with the Senate (and Cooruscant, writ large), Yoda is able to sense this faraway occurrence with Darth Maul’s return and desire for vengeance.

When Savage Oppress takes Darth Maul to Mother Talzin, she inquires: “You found him? I knew you would.”

Savage Oppress: “Yes, he is damaged; he doesn’t remember much of his old life.”
Mother Talzin: “Yes, but he does remember something.”
Savage Oppress: “Something or someone named Kenobi. It is an obsession.”

Again, we see he is quite broken, on many levels, not remembering much of what was earlier in his life, but still being obsessed with Obi-Wan Kenobi.  Mother Talzin then says, “Come, let us fix what has been broken”, sending some sort of magic to Darth Maul.  She then is able to remove his metal spider legs (basically, his bottom half) and then uses her magic to reassemble his legs, gathering various parts from around and gives him new legs, then touches him on the forehead and says, “Arise, Maul, reborn son of Dathomir.”

I found Eric Goldman wrote about this scene well: “The scene where Talzin “fixed” Maul was great, involving more stirring imagery – most notably the way Talzin literally yanked some of the madness and fear from Maul’s head, in the form of black tendrils. And watching her make him his new legs, as the metal mass at his bottom burnt away and reformed, was suitably powerful.”

She then disappears, giving rise to the following dialogue:

From here, we see how gets new legs, then trying them out to walk, falling at first, then running around.  Then:

Darth Maul: “My hatred kept my spirit intact, even though my body was not. As I was lost and became a rabid animal and such is how you found me, brother, discarded, forgotten.  I have missed so much. The Force feels out of balance.”
Savage Oppress: “Yes, there is conflict: The Clone Wars.”
Darth Maul: “Ah, yes. So it began, without me.”
Savage Oppress: “You can begin again, brother,” handing him a light saber.
Darth Maul: “I was apprentice to the most powerful being in the Galaxy once. I was destined to become so much more. But I was robbed of that destiny by the Jedi – by Obi-Wan Kenobi.”

Savage Oppress: “Then you must have your revenge, my brother.
Darth Maul: “Yes, we shall start with revenge.”

Wow – so much to unpack here!!! First, we understand how Darth Maul was able to survive (“my hatred kept my spirit intact, even though my body was not”); second, he notices that the Force feels out of balance; third, he realizes that The Clone Wars have begun without him (so, he must have known that it was supposed to have begun); fourth, he was supposed to be a huge figure in the galaxy, since he was “apprentice to the most powerful being in the Galaxy”; fifth, he sorely desires revenge against Obi-Wan Kenobi.

From this rediscovery and rehabilitation of Darth Maul, we see numerous aspects concerning Darth Maul:

Darth Maul is Out for Vengeance and Tries to Build an Army: Exploring Darth Maul V (Beginning of Season 5 of “Star Wars: The Clone Wars”)

Maul Fights Alongside Ahsoka, Ezra, & Kanan Against the Inquisitors