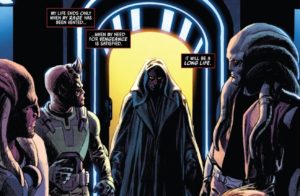 Following his introduction in Darth Maul 1, Darth Maul seeks to find out more about the Jedi padawan he hears about, and seeks to find Xev Xrevus in a bar on Nar Shadaa. When the bartender tells him that only Jedi ask such questions to him and he gets attacked, he whoops butt in repelling the attacks.

In battling the various patrons of this bar, Maul is about to ignite his lightsaber, but, Maul observes, “To ignite the lightsaber would be to reveal my true nature.” And that wouldn’t be good, since, “My master would learn of my disobedience,” he notes, and “The punishment would be severe.”

While fighting, he is able to fend off the attacks and even to kill off one of the leaders before some blaster shots cut through some of the patrons. Upon this occurrence, Darth Maul says, “Thank you for the help, although you could have stepped in earlier.”

“It looked like you had matters well in hand,” declares Cad Bane, who is accompanied by Aurra Sing and another bounty hunter, Vorhdeilo. “I’d wager you could have gotten yourself out of that little jam…with or without my help. But those kills are still going on your tab.”

While it is unclear what prior relationship or even knowledge of each other Cad Bane and Darth Maul have of each other, Bane tells Maul that he “found what you’re looking for” and that he’s “‘negotiated’ passage and an invitation to the little part Xev Xrexus is throwing.”

While still on Nar Shaddaa, Aurra Sing informs Cad Bane and Darth Maul that she is “picking up some troubling transmissions” regarding Jedi on the planet, investigating, which is fascinating, as it seems to involve the antenna from her head. On-screen, even in Star Wars The Clone Wars, we never saw her using the antenna for picking-up communications, which is fascinating to see here.

They’re able to head off to the Drazkel System, where this meeting is taking place and, upon the approach, we see Darth Maul meditating and, quite fascinatingly see him reflecting upon when Darth Sidious took him to Malachor, where he showed him where the Jedi “struck a terrible blow against the Sith.” The flashback to this experience seems to provide a lot of hate-fuel for Darth Maul, particularly against the Jedi.

We then see our band of bounty hunters and Darth Maul enter into the event, which is hosted by none other than Xev Xrexus, who announces that “Recently, scavengers in my employ stumbled upon a Republic transport vessel that had been shot down by pirates. Almost everyone on-board – including the Jedi knight escort – was killed in the crash. But there was one survivor,” she says, announcing, “Eldra Kaitis, a Jedi padawan.” And the auction will be taking place in just a couple of hours.

However, Darth Maul sets out to find this Eldra Kaitis, as Maul observes to himself that others have unsavory reasons for wanting this padawan, but that “none can possibly be so pure as” his own. Maul seeks to “placate the anger that roils within” him, unbeknownst to his master.

At the end of this second issue, he finds Eldra Kaitis….


The next installment of the Darth Maul project continues with the third issue of Darth Maul, when Maul captures a Padawan.
(Visited 617 time, 617 visit today)