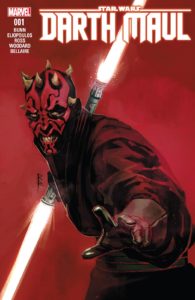 The opening crawl sets the stage for this series, which includes

Two members of the Sith order – Darth Sidious and his apprentice Darth Maul – secretly await their moment to strike. But while Sidious plans an intricate series of deceptions and machinations, Maul grows restless.

The moment of revenge is close at hand, and he is unwilling to wait much longer….

The first issue begins on the planet Twon Ketee, where we see some well-armed hunters searching for a rathtar and who all get killed by the rathtar. However, we then see Darth Maul approaching the rathtar with thoughts of “Fear. Anger. Hate. These mark the steps along the path to the Dark Side. These are the weapons of the Sith. And I have trained to use these weapons well.”

We see Darth Maul enjoying this and, as his thoughts describe, he is sad to see it end so quickly: “The thrill of the hunt…the rush of defying death…will all pass too quickly.”

Curiously, as we see him cutting through rathtars fiercely, we read of him describing his aspirations: “This is but a test…a shadow of the destruction I will bring,” however, he expresses frustration, as well: “If only the leash around my throat would loosen.” Clearly, he wishes to be free of the restrictions his master, Darth Sidious, has placed upon him.

We next see him on Coruscant, where he studies some Jedi and readies to attack, describing them as “Cowards. Wallowing…nesting…hiding in the peace they enforce. Their strength is waning. Deep down, they know they cannot maintain order forever. And when their time begins to tumble into darkness…they will find me waiting for them.”

However, he holds back and whisks away to meet up with Darth Sidious, who knows that Darth Maul came close to engaging in combat with Jedi. Darth Sidious says to him, “I have cautioned you, time and again, to avoid contact with the Jedi. Yet you continue to test the boundaries of my edicts. I have indulged your various hunting expeditions…allowed you to test your mettle against some of the most ruthless beings in the galaxy…but to toy with the Jedi…you risk too much.”

Darth Maul responds back: “I only wish to prove myself, my master. I am ready -” Darth Sidious interrupts Darth Maul to say that “But I am not. Your anxiousness…your timelines…concern me not in the slightest. My plans…and the actions you will take in the name of those plans…will unfold according to my whim.” Darth Sidious cares very much for his planning, then proceeds to mortally threaten Darth Maul if he messes with his plans.

However, Darth Sidious has a task/mission for Darth Maul to help the Trade Federation in dealing with some pirates in their secret mining facilities in the Kellux system. Undoubtedly, he is able to slice through their aerial defenses with his ship and reaches the space station, where he ably slaughters the pirates. While doing this, he laments that “I am the keenest blade in my master’s arsenal…and yet I grow dull through disuse. My frustration…my anxiousness…my desire to test myself against the Jedi…only deepens.”

While getting to one of the last remaining pirates, he tries to barter with Darth Maul for his life, since he sees the lightsaber, thinking he’s a Jedi, and tells him that Xev Xrexus, the boss-mistress of the Xrexus Cartel has captured a Jedi padawan and will be auctioning him off. For some reason, this greatly intrigues Darth Maul and he slays the remaining Trade Federation people there, which is crazy, since they are supposed to be allies, although Darth Maul will simply tell Darth Sidious that all of the Trade Federation folks were killed before he arrived to the station.

There is something about this Jedi padawan that has intrigued Darth Maul, as he thinks “This padawan…a student of everything I have come to loathe…awaits liberation. Surely, it will not be long before the Jedi stage a rescue operation of their own.”


The next installment of the Darth Maul project continues with the second issue of Darth Maul, when Maul tracks down a Padawan.
(Visited 577 time, 579 visit today)