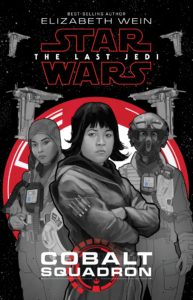 Looking to learn more about Paige and Rose Tico? That’s exactly what Cobalt Squadron is about. Written by Elizabeth Wein, Cobalt Squadron takes place shortly before and during the events of The Force Awakens, leading up to The Last Jedi. Similar to Before the Awakening, Cobalt Squadron is written for a younger audience (although older audiences are, of course, welcome to read it, as well), and explores the background of central characters in the movie.  Focussing mainly on these two sisters, we learn not only more about Rose Tico, the mechanic who goes on a mission with Finn to Canto Bight in The Last Jedi, but also about her sister, who we see heroically dying in the beginning of The Last Jedi.

The story of the book follows a mission on which the bombers of the Resistance are sent prior to The Force Awakens, which explains why we don’t see the bombers in The Force Awakens. It also provides a neat perspective on the First Order’s blasting of the Hosnian System – they are far away from it, yet they are able to experience it. The mission in this book focusses on the bombers initially on a reconnaissance mission to Aterra Alpha and Aterra Bravo, which turns into a supplies-providing mission, where the bombers try to slip by the First Order. (Having seen how slowly the bombers move in the beginning of The Last Jedi, it makes me wonder about how agile these bombers are in this book, but that’s an issue I will let slide.)

While the mission is important, the mission becomes a backdrop for the reader to discover more about the Tico sisters. While we see the two sisters apart in the movie, they are rather inseparable in the book. Rose looks up to “her self-assured, cool-tempered pilot/gunner of a big sister” (219). Rose is actually the mechanic on Paige Tico’s ship. Indeed: “Rose liked to join Paige in the lower turret when they were traveling in hyperspace. She often felt that the lightspeed travel during a mission was the only time she and Paige really had to themselves. Even though they were usually sent on the same assignments, it was rare that they were alone together” (3).

Later on in the book, we see that a superior requests Rose come aboard another ship to serve as their mechanic, but Rose adamantly refuses, which is apparently atypical for her, since she usually was compliant: “You said when we joined the Resistance that you’d always let us fly in the same crew” (188), Rose says. So, ever since they joined the Resistance, they had always flown together.

That togetherness changes, obviously before the movie, when Vice-Admiral Holdo, speaking to Rose, requests “I’d like you to come on-board the Ninka as part of our maintenance team. We’re desperately short of good technicians, and I’m afraid we’ve got a bitter fight ahead of us. I’m impressed with the work you’ve done this week; you’re quick and reliable and you’re good at taking orders, as well as at taking initiative. I need you on my ship” (248). Obviously Rose agrees and becomes split-up from her sister. Somewhat bittersweetly, we see their interaction (and, as readers who have seen the movie, we know that it is their final interaction):

Rose gave her sister one last hug. “See you after the evacuation.”
“See you then, Rose,” said Paige.
Rose climbed out of the gun turret, and out of the bomb bay access hatch. From outside the ship, she could still see Paige in the clear crystal sphere of the ball turret, smiling and waving.
Rose waved back. See you then. (251)

How the Tico sisters came to join the Resistance happened due to the First Order destroying their home planet:

Rose remembered what had happened to her homeworld. The fear wouldn’t go away until the First Order was completely destroyed. She didn’t believe a word of the party line about bringing civilization to the far reaches of the galaxy. She’d seen what they did to the Otomok system: the ice sheets littered with the debris of the First Order’s constant weapons-testing and oily smoke rising from the poisoned settlements. At some point, other people were going to witness the chaotic horror that Rose and Paige had experienced. Rose was determined to put an end to it. She and her sister had joined General Leia Organa’s Resistance movement with the full intention of bringing down the First Order. (5)

When they had joined, they were welcomed by General Organa:

Rose couldn’t remember a time when she and her sister hadn’t shared a love of the sky. But then the First Order had filled the skies of Hays Minor with so much dust and filth that the Tico family could no longer see the stars from the observation dome of their living pod. Paige and Rose’s desperate parents had managed to smuggle their children out of Otomok as refugees. Wearing filtered goggles because their eyes hadn’t yet adjusted to the bright sunlight of an inner planet, with no clothes except those they traveled in, when Rose and Paige met General Leia Organa for the first time, Paige had told her, “Our planet’s being murdered.”

Leia had answered seriously, “I understand.” (7)

Apparently, they were all too aware of the threats of the First Order:

Since the Tico sisters had fled the First Order’s ruin of their home planet in the Otomok system and found their way to the Resistance base on D’Qar, there had always been something to worry about. From dark reports of First Order clampdowns in other star systems, to damaged ships that had to be rewired and armed just in case, to every now and then a wounded pilot’s being hastily carried past on the way to the medbay, on D’Qar, there were always reminders of reasons to be afraid. (4)

Their pendants, which feature in the movie, are made of “pale gold Haysian ore, the teardrop shape of a snowgrape leaf” (10). Furthermore, “The matching pendants fit together to make the ensign of the Otomok system, and it was the single physical link to their home planet that they still shared. Their parents had given them the medallions when they’d said good-bye” (11).

The reason that Rose was requested by Vice-Admiral Holdo was her technological brilliance, primarily in her invention of a “power baffler”:

Rose was good at coming up with makeshift solutions to technical problems. When she’d seen the mini spy-shields that helped camouflage the flight of the probes, she’d start wondering if there was a similar way to modify the engines and computers of her own ship. Rose’s “little monster,” the power baffler, was her quick-fix solution to disperse the energy emitted by the ship’s power sources so it became undetectable except at close range. (9)

This baffler was “a complex half-droid, half-computer that Rose had rigged together to communicate with the ship’s engines and randomly bleed off their ion exhaust. That way, the ship’s power scan looked like it was using hardly any energy, when the StarFortress was actually operating at full blast” (14).

Although “It annoyed her that she hadn’t been able to come up with a way to make it smaller. But she’d had to plug in a link to every single circuit in the engines, and there just wasn’t room to do it in less space in the short time she’d been given to work on it” (15), “Rose was secretly very proud of how the baffler worked. She hadn’t had a lot of time to put it together, and so far, it had been doing its job very well (15).

One further fun tidbit we encounter in the book is Rose’s wish to meet a certain animal: “If I could only see one animal in the whole galaxy, and I’d never get to see anything else, I’d go for fathiers. I’d like to see them in a race. I’d like to ride one -” (141). Of course, as those of us who have seen The Last Jedi, Rose gets her wish not only to see a fathier and to see them in a race, but also to ride one.

Cobalt Squadron is nice little read that provides helpful background not only to Rose Tico’s character in The Last Jedi, but also to Paige Tico and her brave sacrifice, as well as to Rose’s mourning her beloved sister, and their relationship. If you’re interested in discovering more about these characters, then this book will provide that background 🙂