People who know me know that I know Star Wars and not infrequently people ask me if there’s anything Biblically related to Star Wars. They want to know what, if any, connection there may is. So I finally decided it was time to put this together. 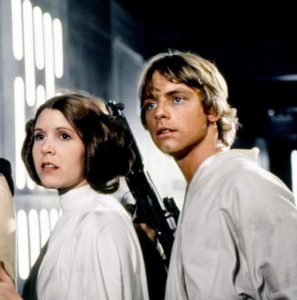 Luke, while a shortened form of Lucas (as in George Lucas), is also the name of the book in the New Testament. Curiously, though, the Lucas surname seems to be related to a particular place which was named after the Luke of the Bible. As Spencer Allen notes, “As a biblical name, Luke appears in the Pauline and Deutero-Pauline letters (that is, Philemon 1:24; Colossians 4:14; and 2 Timothy 4:11), and it served as the inspiration for second-century Christians who would go on to identify Luke as the author of the third gospel and the book of Acts. Of course, we should not overlook the possibility that the hero Luke’s name was derived from George Lucas’s own family name, which may reduce the significance of the name’s biblical associations.”1

Leia is found in the book of Genesis, לאה, who is described as having soft eyes (Gen. 29.17) and as one of Jacob’s wives, she gives birth to Dinah and six sons.

Ben (of Ben Kenobi) is בן, which means “son”, deriving from Benjamin, בנימין, “son of the right side”, who was the last-born of Jacob’s children. Also, Kylo Ren was born as Ben Solo, having been named after Ben Kenobi, so there’s a sequel trilogy character with a Biblically-connected name.

Yoda is similar to the Hebrew יודע knows/knower, which makes sense in that Yoda is full of knowledge.

For whatever reasons, characters in the prequel and sequel trilogies have less of a Biblical resonance to their names. For instance, the Jedi seem to have a lot less Biblical naming resonance in the Prequel Trilogy, as Allen points out: “Of those Jedi who are first introduced in the prequel trilogy, the name Mace Windu quickly comes to mind, and nothing about this name seems biblical or Hebrew. Moreover, the less well-known Jedi in these movies have names that lack biblical associations. Among the Jedi in Episode I: The Phantom Menace,we find names like Qui-Gon Jinn, Quinlan Vos, Plo Koon, Ki-Adi-Mundi, Saesee Tiin, Yaddle, Even Piell, Oppo Rancisis, Adi Gallia, Yarael Poof, Eeth Koth, and Depa Billaba as well as the Sith Darth Maul (Lucas 1999). Of these, only Yarael Poof has potential biblical associations since the theophoric element “-el” appears at the end of numerous biblical names (for example, Samuel and Israel). Yarael could be construed with a possible meaning of “fear of God,” but this seems very unlikely to be intentional, especially since this is a character that few in the audience would even recognize.”2 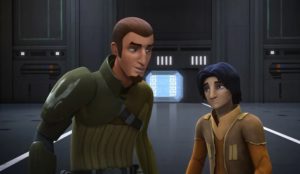 Unlike Star Wars The Clone Wars or Star Wars Resistance, Star Wars Rebels had an unusually high number of Biblically-related names, as James Burns pointed out.  In that piece, Burns quotes Simon Kinberg as saying “One of the things we did say consciously was that there was a biblical sense to the naming and to sort of seriousness of purpose of the original movies. The cloaks themselves have a form or religious feel to them. We were aware that there was an element of that from the original films that we were trying to connect to.”

Also, “In Star Wars Rebels, the characters with biblical names are typically human, those with Roman historical names are usually Imperial officers or Imperial sympathizers, and those with mythical names are sentient, alien beings. By manipulating these onomastic patterns, not only does Star Wars Rebels remind the audience that the alliance will defeat the Galactic Empire, no matter how dark their future may seem in the series, but the show also provides a glimpse into an alternative universe to our own where Rome never destroys Jerusalem or magnifies the already existing Jewish diaspora. In this way, Star Wars Rebels transforms the Star Wars fantasy into an allegory. Here, in the outer rim of Lucas’s galactic creation, the Israelites and Jews defeat the evil Roman Empire and maintain their freedom.”3

Ezra Bridger, the main character of the show, comes from עזרא, who had a Biblical book named after him. The name means “helper”, although Ezra, as we see throughout the show, develops to become more than simply a helper.

Kanan, while not exactly matching up, sounds a lot like כנען Canaan, the people that derived from their biblical ancestor Ham and whose land the children of Israel would eventually settle. Furthermore, Kanan’s name was originally Caleb Dume, the first name of which is the same as “dog” in Hebrew (כלב), and “is also the name of the scout who spies out the land of Canaan at Moses’s request in Numbers 13:1–33 (especially verse 3). In the Bible, Caleb scouts Canaan and is one of the two men—out of twelve spies—who brings a positive report back to Moses and the Israelites. Caleb is certain that the Israelites can overtake the peoples of Canaan. The play here is unmistakable; the fourteen-year old Jedi Padawan Caleb Dume has more confidence than his reinvented self-identity as the smuggler Kanan Jarrus, a man who is in hiding because the Jedi were hunted into extinction because of Order 66.”.4

Ephraim Bridger, the father of Ezra on the show has a name that is the same as אפרים Ephraim (see, for instance, Genesis 41:52).

Am I missing any others?

Mandalorians and The Darksaber [Video]