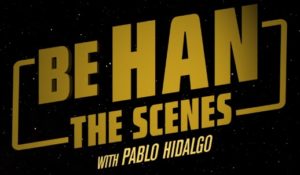 The segments appeared between May and September, with the first segment, “Lando’s Falcon” coming out on the May 16th episode of “The Star Wars Show” and the final segment, “Aliens”, appearing just two days ago on “The Star Wars Show”. The other segments were “Dryden’s Study” (June 6th), “Corellia” (June 13th), “Han’s Speeder” (August 29th), “Creatures & Droids” (September 5th), and “Visual Effects” (September 12th). As opposed to “Rogue Reports with Pablo Hidalgo” in which the six segments were released fairly close to the release of Rogue One, the first three episodes of “BeHan the Scenes with Pablo Hidalgo” occurred around the release of Solo, with the final four leading up to the DVD and Blu-Ray release of the movie.

“Lando’s Falcon” is the only segment in the bunch that consists exclusively of Hidalgo speaking, without him interviewing anyone and it is a neat little tour of the Millenium Falcon. One highlight is when Hidalgo shows us a circuitry bay, noting “This is what we call the circuitry bay, although most people remember it as the makeout room from The Empire Strikes Back. Interesting thing about this room is that it does not exist on any blueprints, which makes us think maybe the whole set was improvised for The Empire Strikes Back.”

One interesting piece of background is about modelling Han’s speeder at the outset of the movie: “I think everyone on the production wanted it to be sort of partially 1960s muscle car, and then obviously a nod to speeders we’ve seen before, like Luke’s speeder,” said Gary Tomkins, senior art director in the “Han’s Speeder” segment. “A lot of the references that we had in the early days of this film were Bullitt, The Driver, and a lot of those sort of 60s, 70s car chase movies.”

I hadn’t realized how many creatures were involved in this movie, but Neal Scanlan said, “This is probably going to be the biggest show of droids and creatures that we’ve done for a movie so far. A droid is very much a character – they have their own personalities and it’s very important to us that each droid has that personality and that we can somehow identify and sense like them.” When I re-watch Solo, I will definitely appreciate the movie’s inclusion of droids and creatures a lot more. Scanlan, who was in charge of special creature effects on the movie, blew me away with this information on the “Creatures & Droids” segment about Lady Proxima: “We built a tank: the tank is over 11 feet deep in sections. Inside, the tank is nearly 30 puppeteers, they’re all in wetsuits, they’re all submerged, and they’re responsible for bringing Proxima alive.” Wow!

One curious item Hidalgo shows us is a Sith holocron amongst Dryden Vos’ collection of artifacts: “We have a collection of ancient technology, including, quite literally, the capper on this collection, what appears to be a Sith holocron. The fact that Dryden has a Sith one should settle any doubts as to the nature of his character.”

In case you were interested, here is a listing of all of the segments, with their timing: