<Cross-posted from Drew’s Views>
In the very first Star Wars movie (whether you want to call it “Star Wars”, “Episode IV” or “A New Hope”), we are introduced to Obi-Wan Kenobi, who tells Luke Skywalker, our young protagonist, that he knew his father.  Young Skywalker says “Oh, my father didn’t fight in the wars: he was a navigator on a spice freighter!”  After Kenobi tells Skywalker that that was the spin Skywalker’s uncle told him, Luke inquires – a bit baffled by this new revelation –  “You fought in the Clone Wars?”  Kenobi soberly responds to him by saying, “Yes, I was once a Jedi knight, the same as your father.”  Skywalker then ruefully states: “I wish I had known him” to which Kenobi responds: “He was the best star pilot in the galaxy.  And a cunning warrior.” 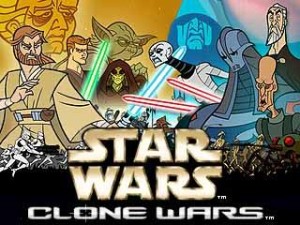 In this dialogic interchange so early on in the original Star Wars film, the viewer is introduced to the Clone Wars very early on.  The curious viewer certainly wants to know more about these Clone Wars.  Furthermore, one gets a bit excited about the possibilities for watching some epic battles in these famed Clone Wars!

In 2008, when a new Star Wars movie was coming out in theaters, I got very excited, thinking that this would be a bigger version of the original Clone Wars series. However, when it came out, it was nothing of the sort.  Yes, it did take place during the Clone Wars, but it was very unclear how it matched up chronologically with the original series.  I was greatly disappointed.

I was, however, somewhat hopeful when I heard of a television series continuing on what the movie had started.  For a while, I remember being confused as to how this series, “Star Wars The Clone Wars“, would match up chronologically with the original Star Wars Clone Wars series.

Eventually, I gave up trying to figure it out and sat back and enjoyed the new series.  I had no idea at the time how long it would last.  I am glad it made it to 5+ seasons, resulting in over 100 episodes, which is really great to have so much more new Star Wars material!  And quality, too!  Now that it’s coming to a close, I realized I ended up greatly enjoying it and want to watch it again.  However, in addition to simply watching it, I plan on sharing my assessments of all of the Clone Wars materials that have been broadcast on television as well as the movie.

Boba Fett in Television & Movies II: The Empire Strikes Back

2 thoughts on “A New Project re: The Clone Wars”