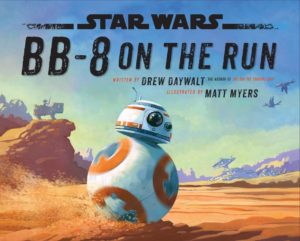 What happens to BB-8 between the time he leaves Poe and finds Rey?

According to The Force Awakens – both the movie, as well as the novelization – we don’t have a particular story about what happens to BB-8. All we see is him departing from Poe Dameron in the Tuanul village, where Poe exhorts him to go on his way and then we see him entangled in a mesh-net of Teedo being rescued by Rey.

Well, a new book recently out seeks to tell that story. Written by Drew Daywalt and illustrated by Matt Myers, the new book BB-8 on the Run explores the story of what happened to BB-8 between leaving Poe and finding Rey. Of course, it could simply be a narrative expansion of BB-8 just wandering in the desert, however, it is still a great opportunity for Lucasfilm to tell this story.

The prime driver of this book it is something that BB-8 remembers that Poe had once said to him, “It’s easy, buddy. You do good things, and good things will come back to you.” On his journey, BB-8 encounters Teedo, who tries to sell him for parts, which doesn’t seem to work out for him. However, he also seeks to help out a happabore, a fellow droid, and an impoverished family, all with whom he considers Poe’s aphorism to him.

Meanwhile, all throughout these encounters, he is chased by Teedo (thus, he is on the run) in the desert of Jakku (until the end, when he is ensnared by Teedo).

It’s certainly a cute book and serves to expand the narrative of The Force Awakens. Other such efforts to expand The Force Awakens story-telling have been the C-3PO comic where he gets his red arm before the movie, the Poe Dameron rescue scene on Jakku (in the novelization for about seven pages), and the recent Forces of Destiny shorts with Rey and BB-8 (and let’s not forget, of course, Before the Awakening).

I certainly enjoyed reading BB-8 on the Run, especially to get a little more BB-8, as well as meeting some other personalities on Jakku. I will say, though, that while the story is unnecessary, it is an interesting choice to situate it in this small time gap within the movie. In any event, it’s a cute book and tells a cute moral about doing kind deeds for other people.

Discussing “Guardians of the Whills” on the Newest Episode of “Skywalking Through Neverland”
Tags: BB-8 on the Run, Book, Books, The Force Awakens