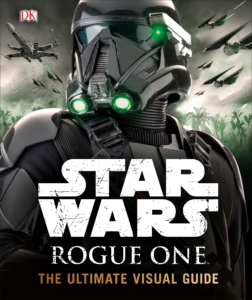 In the very informative and thorough Star Wars: Rogue One: The Ultimate Visual Guide, one discovers a lot of information about Rogue One. This book (henceforth, referred to as the Rogue One Visual Guide) came out the same day as Rogue One in mid-December and has a lot of fascinating information about characters, places, and more in the movie. This book has a load of information that should satisfy everyone. Whether one is merely looking to understand who is who in the movie, whether one wants to know about all of the ships and places in the movie, or know about every single character (and their random-naming). While one can certainly pick up a copy, I wanted to offer what I considered to be five fascinating facts that emerge from this book:
1) Why the Mon Calamari Have Capital Ships for the Rebel Alliance
While I had never wondered why it is that Admiral Ackbar is commanding a ship in Return of the Jedi, there is, apparently, a backstory that becomes revealed about the Mon Calamari having capital ships for the Rebel Alliance and why they do:

As befits a hodgepodge organization like the Rebel Alliance, its fleet consists of a motley assortment of ships – Hammerhead corvettes, Dornean gunships, Alderaanian cruisers, and Gallofree resupply transports. However, in the remote Telaris star system, this fleet is in the process of acquiring a new and mighty spine. The imperial occupation of the Mon Cala ocean-covered world triggered a massive exodus of Mon Calamari vessels. Enormous city-ships disappeared into hyperspace and are now being converted for war by rebels in deep-space facilities far from Imperial naval patrols. Raddus’ flagship, the Profundity, is one of the first war-converted cruisers ready for combat. (p. 42)

The peaceful Mon Calamari learned harsh and costly lessons during the Clone Wars. So when the Empire brought them more subjugation, the aquatic race was ready. A launch of spaceworthy structures that the Empire mistook to be city buildings heralded a mass exodus from the watery world to safer shoals in the depths of space. The Mon Calamari took to converting these transports and passenger liners into capital ships, with Admiral Raddus’ Profundity one of the first ready for battle. (p. 182)

2) Citizens Not Noticing The Empire Was Primarily Military
How come there is not widespread uprisings against the empire? Apparently, people hadn’t realized:

The line between the Imperial political machine and the Imperial war machine has blurred. The Galactic Empire was formed from a a Republic recovering from war. It transformed into stratocracy – a government headed by military chiefs – so gradually that many in the galaxy took no notice. The citizens simply believed that the Imperial Senate and powers in charge represented their best interests. (p. 120)

3) Mon Mothma Leaves the Senate and Creates the Rebel Alliance

While we get to see Mon Mothma become part of the Rebel Alliance in the Star Wars Rebels episode, “Secret Cargo”, we find out a little bit more detail:

After escalating outrages committed by the Imperial military left her no choice, Mon Mothma spoke out publicly and directly addressed Emperor Palpatine as a “lying executioner” in a widely broadcast HoloNet proclamation. Such treason immediately rocketed Mothma to the top of the Empire’s “Most Wanted” list, and she fled Coruscant – resigning her seat in the imperial Senate. It was this declaration of rebellion that gave rise to the formal Alliance to Restore the Republic. (p. 40)

Mon Mothma was born into political life. Her father was an arbiter-general in the Galactic Republic, and her mother was a governor on their native Chandrila. When she was old enough, Mothma joined the Galactic Senate, becoming one of the youngest senators in the council to date. Her political ascendancy accompanied the most trying times for the Republic – a Separatist crisis precipitating the outbreak of the Clone Wars. (p. 40)

4) What is the Rebel Alliance?
What does it mean for the rebels to be allied?

The Rebel Alliance Hierarchy consists of two main bodies: the military and the civil government. The existence of a governmental apparatus within the Rebellion is indicative of its ultimate aim: to restore the Republic and the Galactic Senate as instruments of egalitarian and democratic ruin. Arranged beneath Mon Mothma, the titular chief of state of the Alliance Civil Government, is the Cabinet – a collection of six allied ministers with specific areas of responsibility.

The rebel council is a mix of military and civic government representatives. It is, by design, meant to encompass varied viewpoints. Debate and disagreement are both encouraged in the model of democratic governance. But, in troubled times, such an open forum leads to deadlock. Mon Mothma is wary about wielding too much against the Empire tor executive power, as that is the very embodiment of their sworn enemy, the Empire. Though no longer a member of the Senate, Mon Mothma remains in communication with her allies there, and sympathies for the Rebellion continue to grow. It is now the Rebellion’s most crucial moment. If the Death Star menace is real, then the Alliance stands at the brink of destruction just as it is about to shine a light on the true evil that is the Galactic Empire. (p. 50)

5) Krennic’s Shuttle Has Easy Access
It seems as if Krennic can easily just fly wherever he wants to – that’s because he can:

Krennic’s distinctive title broadcasts security clearances that allows it entry at other restricted landing ports. Krennic’s pilots do not offer hailing signals, regardless of protocols or courtesy. Instead, the automated transponder passes along everything a listener would need to know: that shuttle ST 149 is on Tarkin Initiative business, with an lmperial advanced weapons director aboard. (p. 24)

Bonus: Lyra’s Connection to the Force
Since people watching Rogue One are ever so curious about Lyra Erso handing a kyber crystal (just the right size to fit within a lightsaber of a Jedi), it is certainly interesting to read about any connection she may have had to the Force. I, myself, was surprised to have read that she wore “scarlet vestments of the sects native to Jedha”:

Though Lyra never met a Jedi Knight, she studied their history and philosophies, even when the Galactic Empire frowned upon such research. It is not known if she ever made contact with the rumored Church of the Force movement reputed to be growing in the shadows of Coruscant, but she did, at that time, don the scarlet vestments of the sects native to Jedha – one of the last holy outposts of Force knowledge in the galaxy. (p. 18)

I hope that proves to be helpfully informative!

10 Highlights of Vehicles from Star Wars: The Last Jedi Cross-Sections

“Guardians of the Whills” Provides Insights into Jedha, Saw Gerrera, Chirrut Îmwe, and Baze Malbus Prior to “Rogue One”